A Good Cause: Why You Should Sign Up for Charity Cycling Event 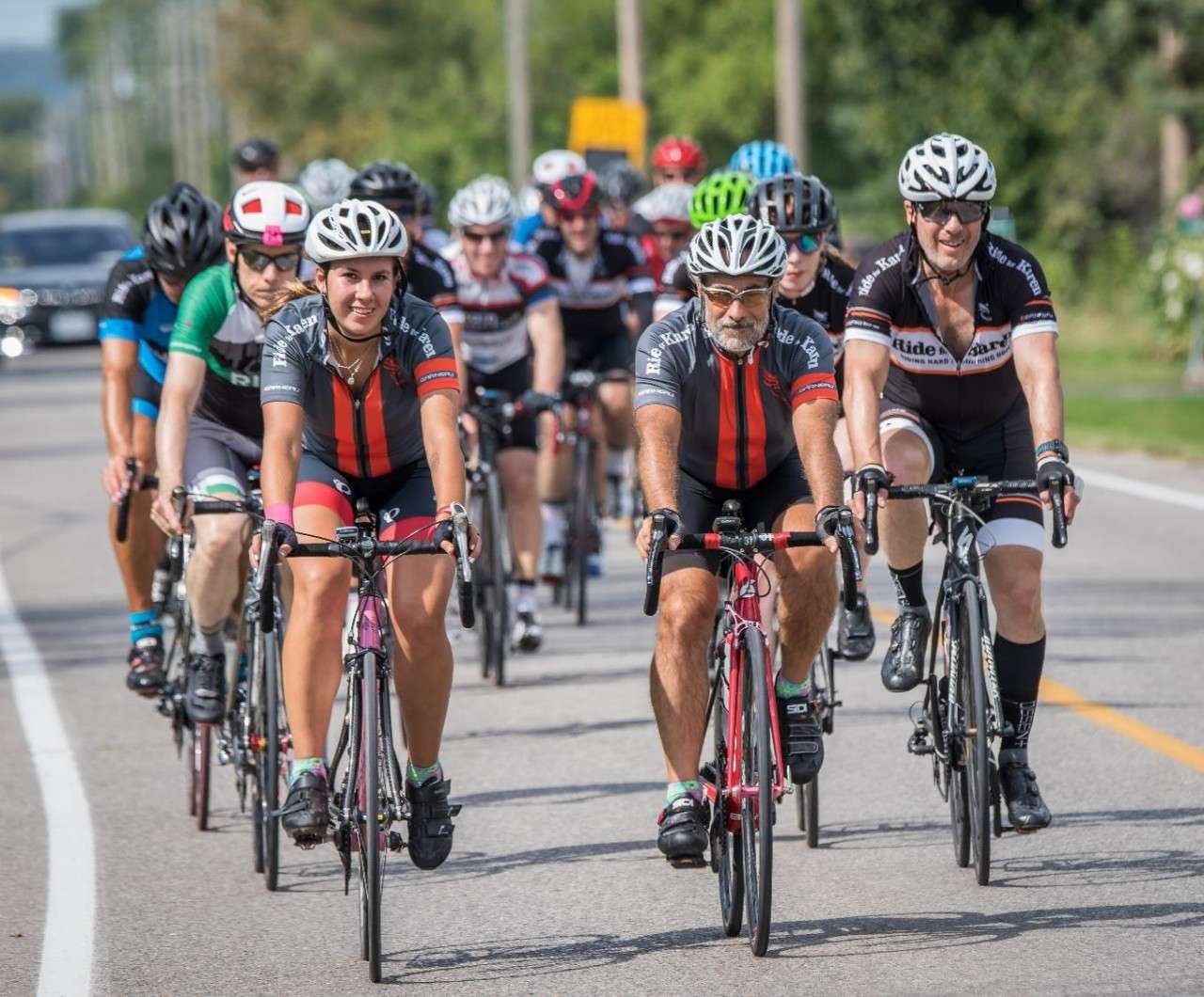 This article was originally published in the 2018 Cycling in Ontario Guide and was written by Bonnie Munday.

CHARITY RIDES ARE A FUN WAY TO EXPLORE ONTARIO AND DO SOME GOOD TOO
There are so many good reasons why it’s a great idea to do a ride for a charitable cause. For me, setting a goal of doing my first one several years back was the perfect excuse to improve my performance on my road bike. Since then I’ve done a handful more and have never regretted it. Here’s a little primer.

PICK YOUR RIDE
Honestly, I find that it often comes down to the date of the ride – summer weekends can be so busy that the date simply has to work for my schedule. Obviously, some people choose their ride based on what charity it’s supporting; perhaps there’s one that’s close to your heart or raises funds for an illness that has affected a family member or friend.

My first charity ride was 100km with Ride for Karen. It takes place mainly in rural – and sometimes very hilly – York Region. It’s organized by two brothers whose mother, Karen, died of breast cancer. Since both are keen cyclists they decided to organize a charity ride in her name, and it has grown in popularity since then, raising more than $2 million to allow kids with cancer to go to camp. It’s really tough to argue with that as a cause.

Some people pick their ride based on the minimum funds required to participate. Others make their choice based on a particular distance that they want to do; many rides offer a variety of distances anywhere from 10km that you can do with your kids all the way up to 200km. Others choose their ride because of the differing landscapes and destinations they get to explore by bike.

SEE BEAUTIFUL ONTARIO
There is such a variety of terrain across the province, whether northern, central, southern or eastern Ontario. For a 160km “century ride” (100 miles) I did with a few friends – not an organized charity ride, but one where we each made a donation to the Right To Play charity as our self-imposed “entry fee” – we chose the Welland/Niagara area since it’s so flat. We figured 160km would be tough enough without lots of hills!

And I was wowed by the beauty of riding alongside the Niagara River, past the shores of Lake Erie, along the Welland Canal towards Niagara-on-the-Lake and wine country, and back to Niagara Falls.

What better way to see this beautiful province than from the seat of a bike? I’d visited the Waterloo region many times in the past – by car – but only when I did a two-day ride called Tour for Kids did I get the real feel of Waterloo. Tour for Kids takes place in a different location each year, and, like Ride for Karen, it raises money for kids with cancer to go to summer camp. 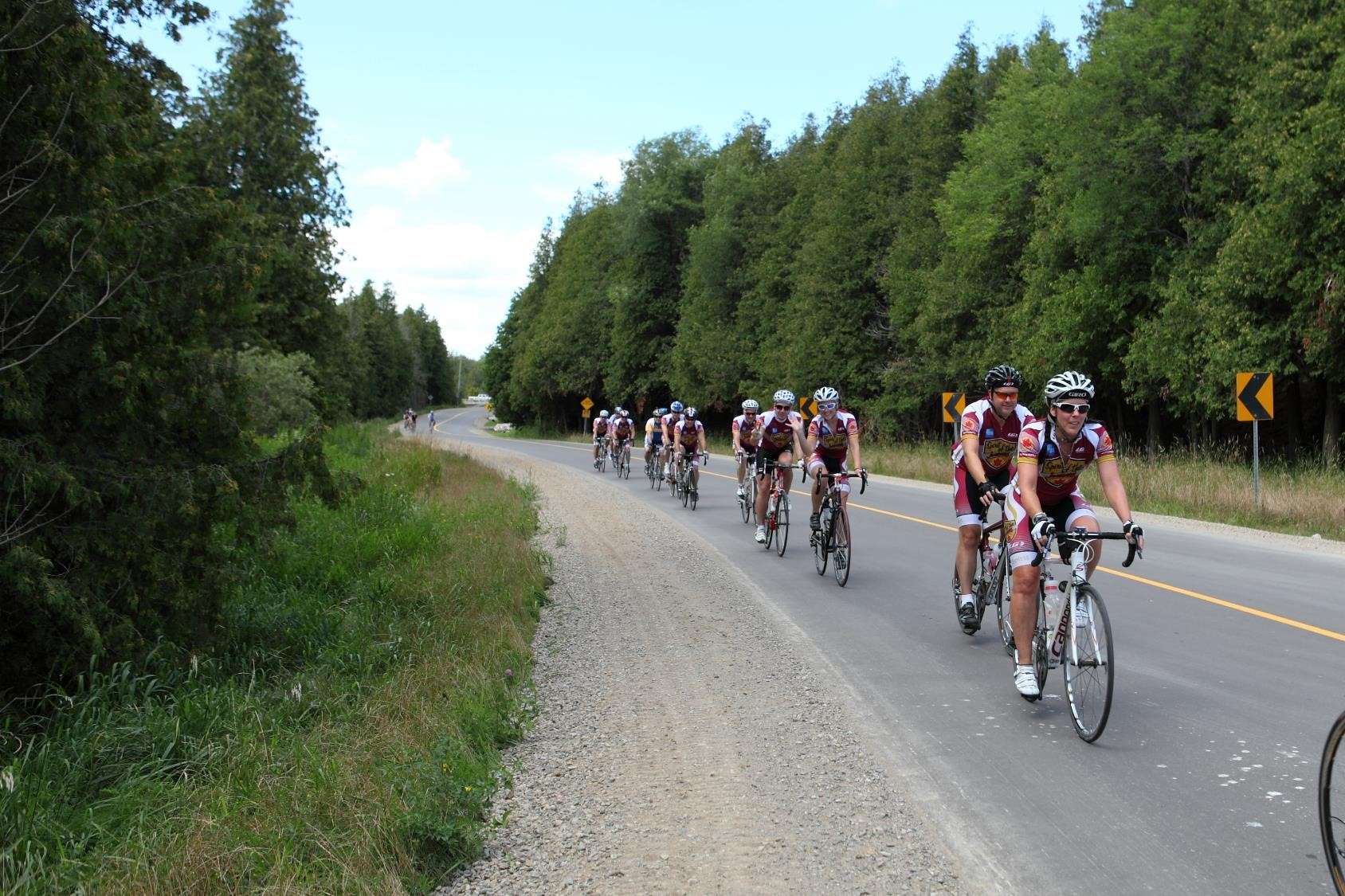 When I did this ride I chose to cycle 100km a day on both Saturday and Sunday. Day one was cycling all around the Mennonite farm countryside, with beautiful rolling hills, keeping the cycling interesting and fun. It’s a well-supported ride, with lots of marshals en route, plus snack and bathroom-break areas. Dinner was a fun meal with hundreds of other cyclists under a big tent, and most people stayed overnight in comfy rooms at the University of Waterloo student residence. On Day two we rode from Waterloo on a lovely meandering route down to Oakville, where the ride ended in celebration.

REAP THE REWARDS
There’s nothing like setting a deadline to get ready for something – and knowing that you’ll be challenged to ride a long distance on a particular date is as good as it gets. You really must train for something like that, and that creates focus and leads to better fitness and performance.

A couple of months ahead of each long-distance charity ride, I make sure to work my way up to ever-increasing distances. It’s the only way to build muscles and speed, and to minimize aches and pains while you’re in the saddle. After all, when you log lots of kilometres, you figure out what body parts are getting strained. On my first summer of more serious road cycling, four years ago now, I had neck aches while training, so I brought my bike into the bike shop to check whether the fit was as good as it could be. They ended up needing to adjust my handlebars, which were a bit too much of a reach for me. 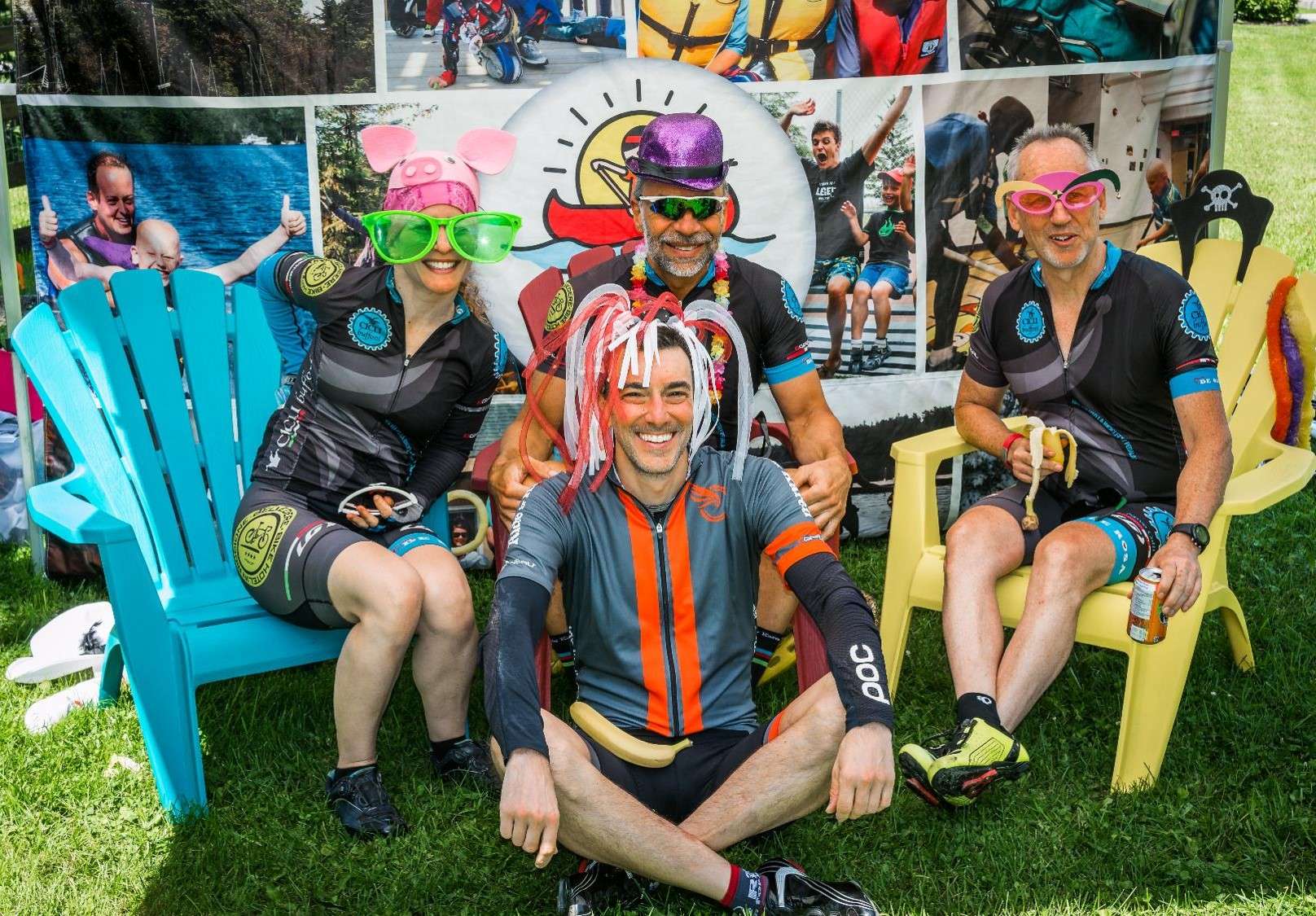 The most obvious reward, behind achieving a goal you’ve set, is that you have done something for someone in need. You do have to put effort into raising funds – something that’s surprisingly fun, and gets you even more engaged with your chosen cause – and on the big day, when you look around you and see everyone excited to get cycling, it’s a great feeling when the organizers announce how much money everyone has worked together to raise.

In fact, I couldn’t imagine doing these long-distance cycling events without the added incentive that it helps someone else besides myself. It just doesn’t seem right to feel so great physically when you train for and finish these challenges and not share the good feeling with others – all for a worthy cause.

To find out more about these rides visit: rideforkaren.com & tourforkids.com

This article was originally featured in the 2018 Cycling in Ontario Guide. 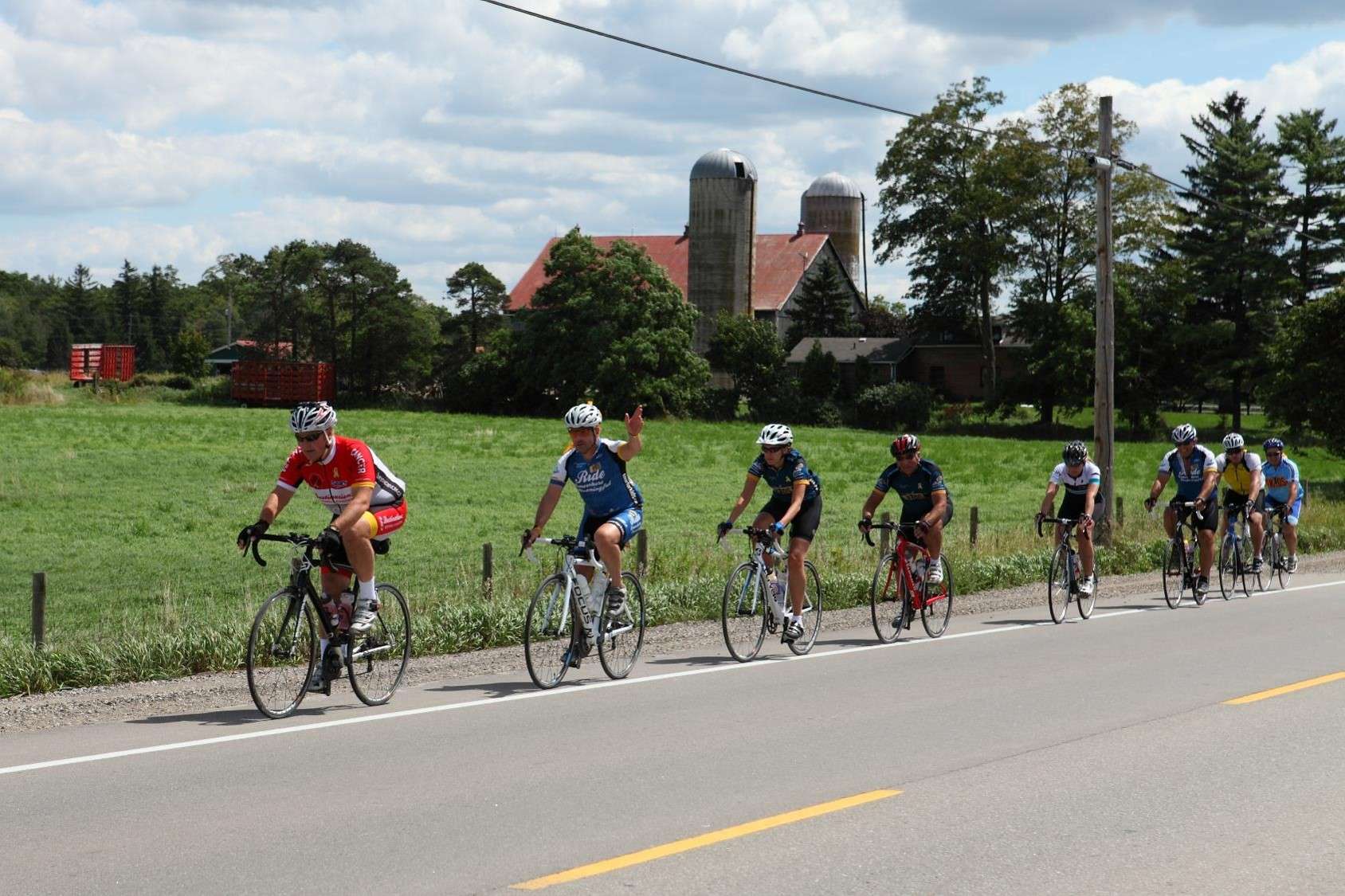 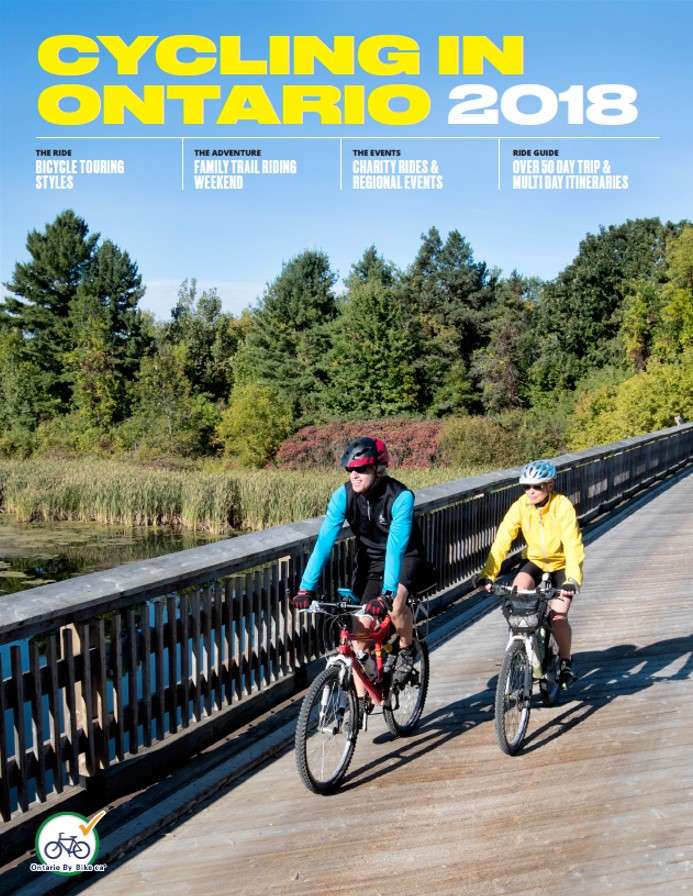