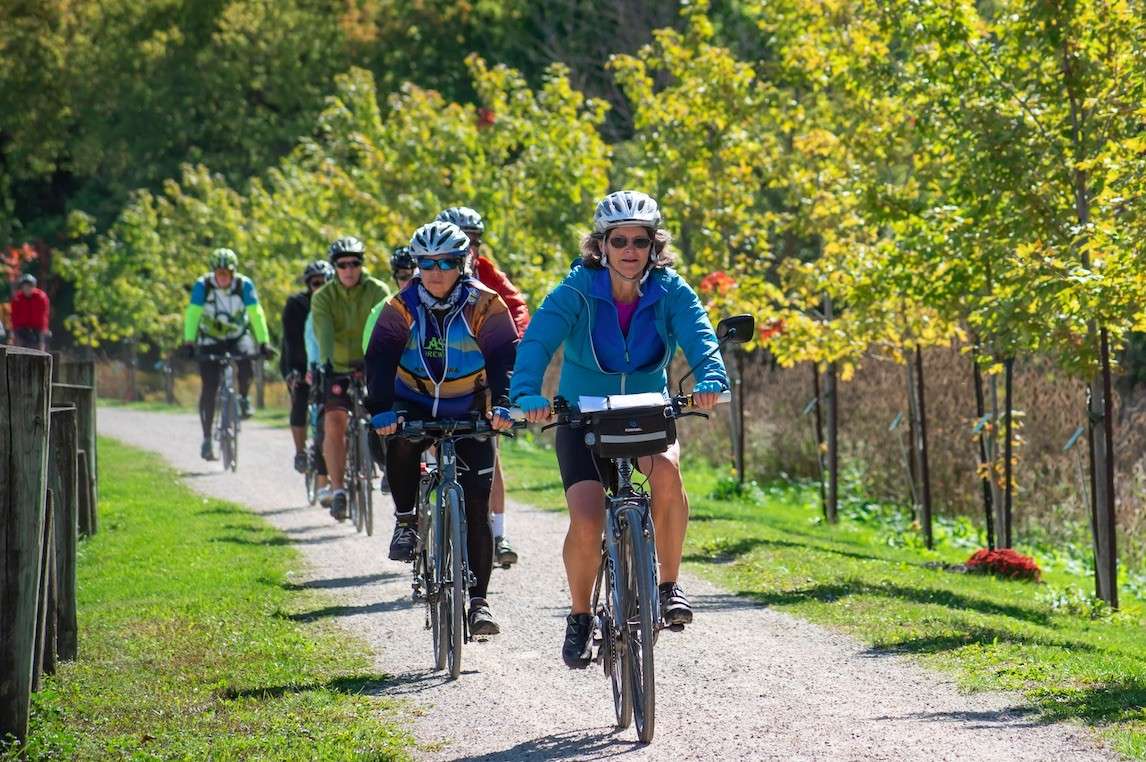 There is always a thrill in travelling to somewhere new, something we were keen to experience this summer with travel keeping us all closer to home. Having long heard about the excellent bike trails, quiet country roads, small town charm and modern city amenities we enthusiastically began research mid winter on the ultimate looped two day ride itinerary to explore the Waterloo Guelph area.

Setting out on a Saturday morning in September, with a group of 40 plus Ontario By Bike Riders, we test rode the route and discovered a perfect mix of ride experiences and a great bike getaway weekend, easy to replicate. So set your pedals in motion and put this ride itinerary on top of your list for a late fall or early 2021 adventure. It won’t disappoint.

While mostly routing through the expansive Waterloo Region, we didn’t want to miss the opportunity to get out on the G2G Rail Trail (Guelph to Goderich) which has been newly resurfaced end to end. Starting in the east from the ‘Royal City’, richly nicknamed as such by an early founder as homage to British royalty, after connecting to the trail we followed a 27km segment also known and well signed as the Kissing Bridge Trailway. Quickly out of the city’s reach, the hard packed stone dust and flat trail bisects rolling farmlands and has its ample share of tree canopied easy riding.

Several trail breakaways make for worthy on stops on the G2G between Guelph and Wallenstein, where the route leaves the trail behind. No ride in the area would be complete without the necessary trail detour to roll under the historic wooden arches of the famed West Montrose Covered Bridge (aka the Kissing Bridge) that spans the Grand River. A picture perfect and most peaceful stop, there is also a handy variety store where a healthy intake and sampling of local baked goods can be started. 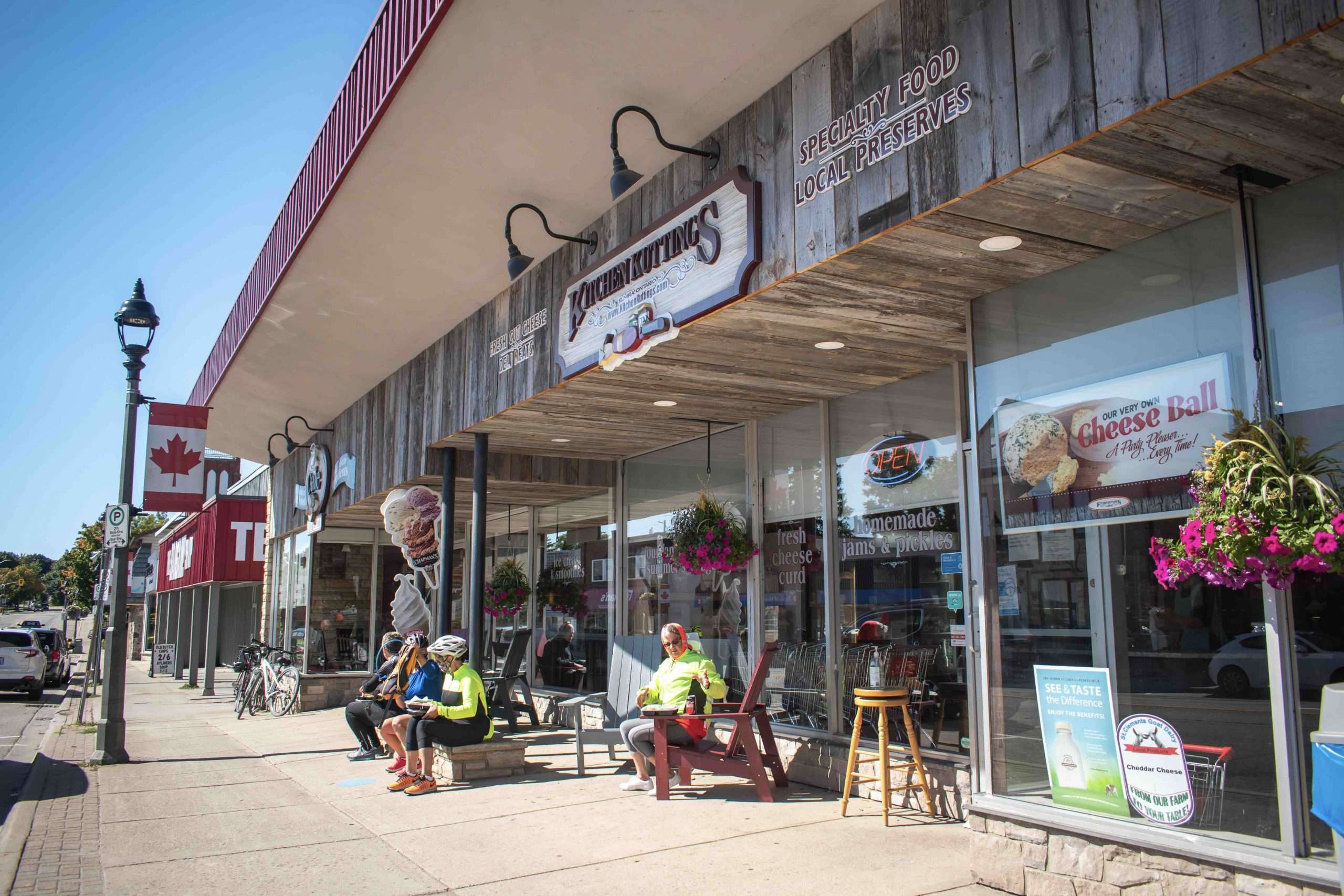 Circling back on to the trail, another 7km will bring you to Arthur Street and the cross road where the trail runs through the small, predominantly Mennonite, town of Elmira. Plan to have lunch at or pick up picnic supplies at the well stocked and welcoming Kitchen Kuttings. This Mennonite run café is a popular spot and serves up the freshest sandwiches in memory, with a range of butter tart choices that are worthy of any calories that may or may not yet have been burned! 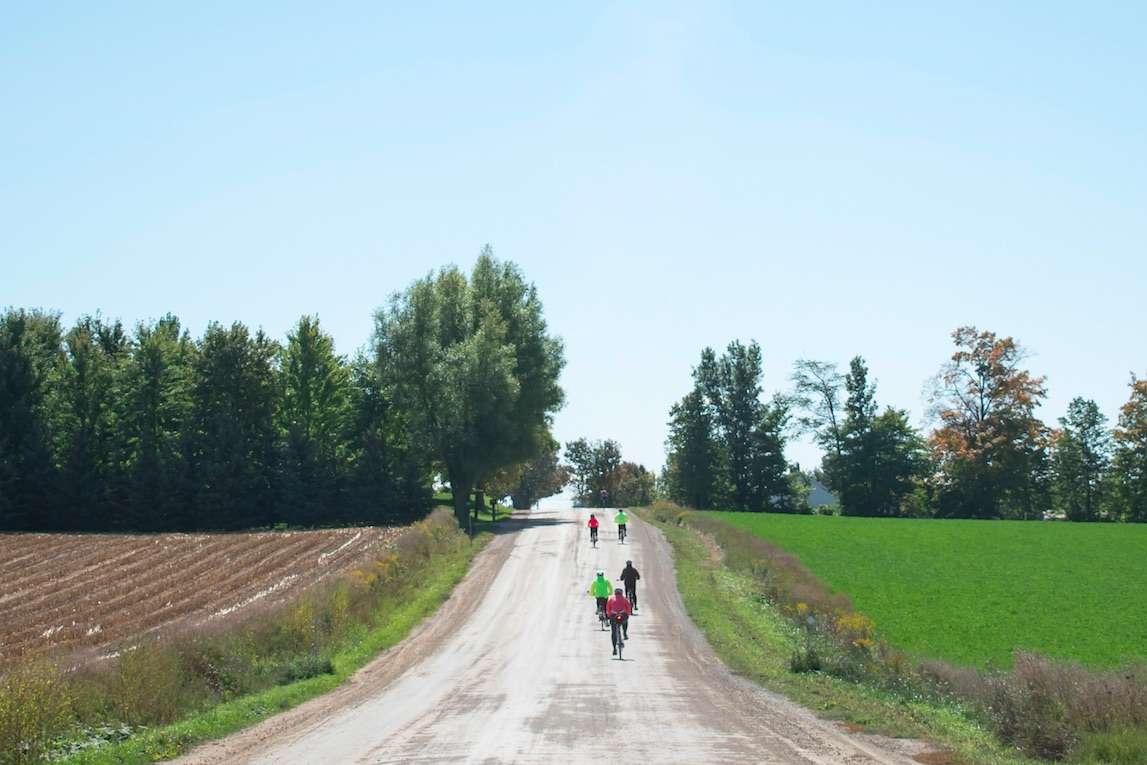 While rail trail fans may be saddened to depart the lovely G2G trail just a fifth of the way into the two day ride distance, the best is yet to come. From Wallenstein to St Jacobs the route winds its way through Woolwich Township, an area well known to local cyclists for having some of the most scenic roads. With a mix of quiet gravel and paved surfaces, we marveled at the well-kept farms, lush green valleys and river tributaries, making the 14km to the village of St Jacobs a most memorable and true ride highlight. This pretty little small town is full of charm as its main street is lined with shops, cafés and artists’ boutiques. Set down on the patio for some refreshments at the old mill building now housing the EcoCafe or just opposite at the Block Three Brewing Company, both certified bicycle friendly businesses by Ontario By Bike. 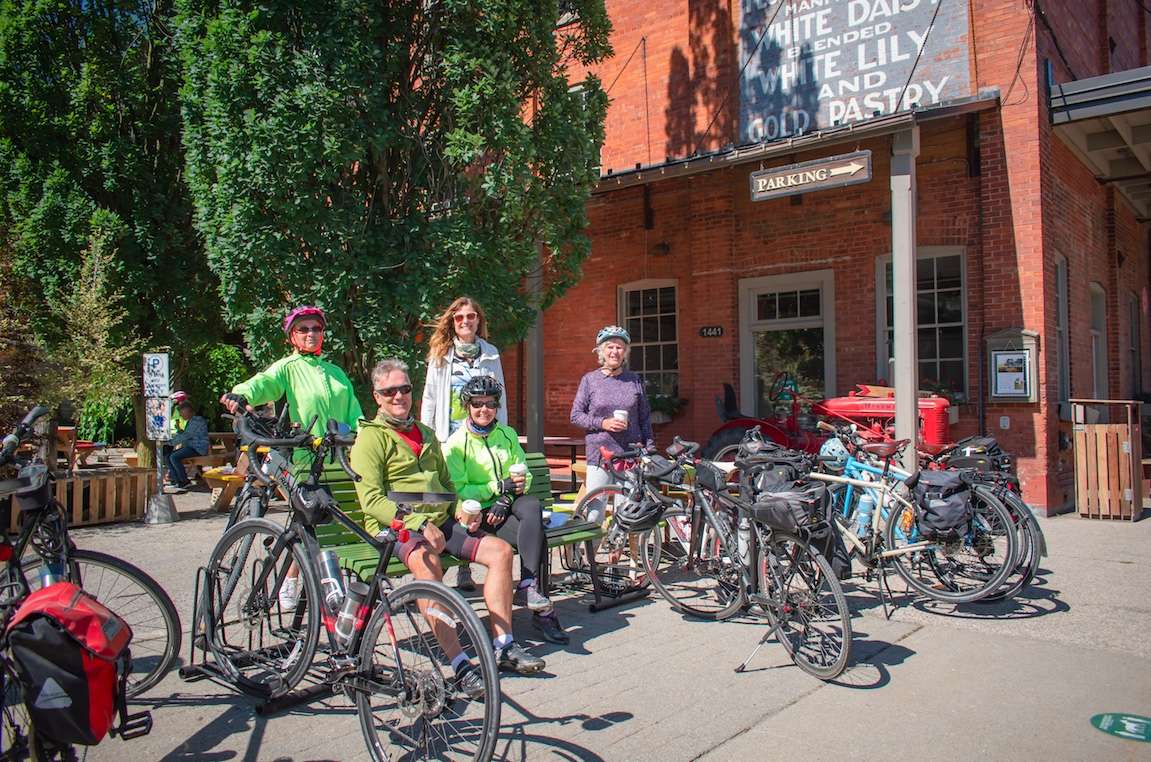 The last leg of day one follows a route past the popular St Jacobs Market, with its outdoor stalls bustling on Saturday market days, and onto a series of connecting trails through the parklands surrounding the University of Waterloo and into Uptown Waterloo. You may think you are entering a European city with the outstanding cycling infrastructure that runs alongside the relatively new ION Light Rail System, that really sets the co-joined cities of Kitchener Waterloo apart from any other smaller Ontario city, while poising it for future growth in the most sustainable way.

With no shortages of accommodations and dinning options, Kitchener Waterloo is the ideal spot to end day one after 60 plus kilometers. Enjoy dinner along King Street at a gastro brew pub, or sample some Thai, Asian, South American cuisine or seek out an old school Bavarian restaurant, as the area is well known for its early German heritage and annual Oktoberfest celebrations.

Just a single day visit will leave much undone and leaving the city area you’ll quickly realize that a return trip is necessary. While this route follows the Laurel Trail into Waterloo, the Iron Horse Trail between the two cities, and regional trails in through Cambridge, we barely touched a fraction of the 500km of on-road bike lanes and off-road multi-use trails across the region, not to mention the 30km of well regarded mountain bike trails at what is known as the Hydrocut. 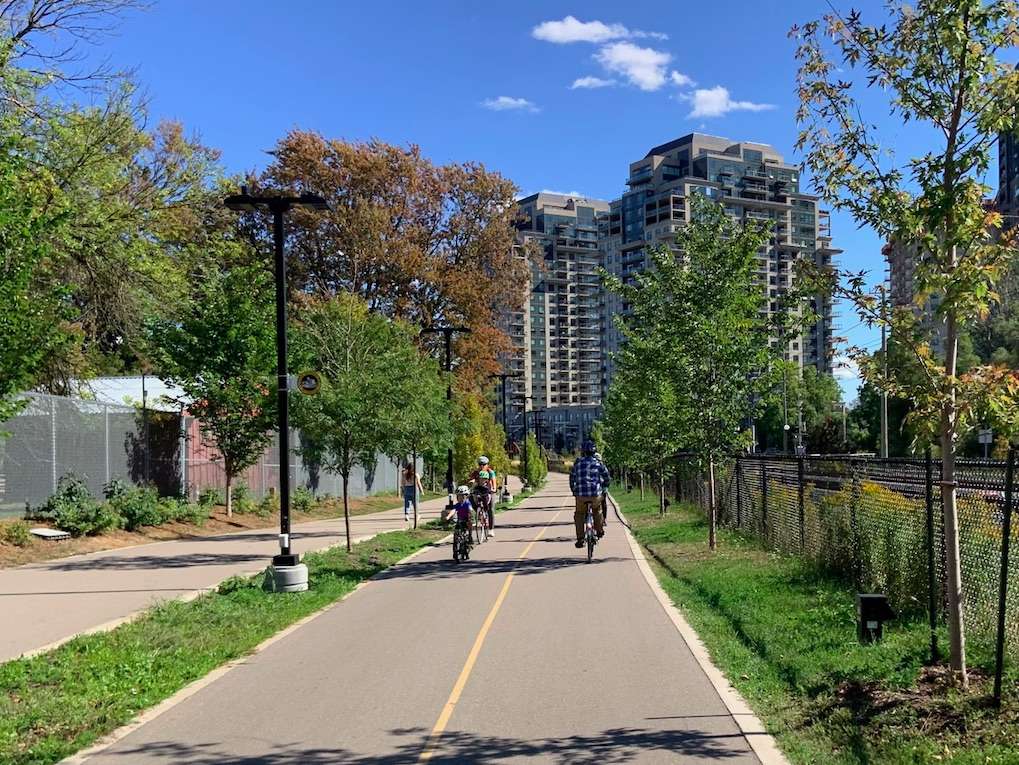 Having just 20km of day two under ones belt, enjoy a welcome stop alongside the Grand River in Homer Watson Park at the Ken Seiling Waterloo Region Museum. Learn about local heritage and see local art at this large bicycle friendly attraction on the way before enjoying a pretty stretch along Mill Park Drive and Old Mill Road where another heritage gallery stop beckons, the Homer Watson House.

Following a mix of quiet residential streets and roads with shared use bike trails, cross Canada’s busiest highway, the 401, on an elegantly engineered pedestrian and cyclists’ bridge, into Cambridge. Cycle past old brick textile manufacturing buildings that line the banks of the Grand and its tributary, the Speed River, as the Mill Run Trail connects the smaller Cambridge city hamlets of Preston and Hespeler. Be sure to stop at the expansive Riverside Park or at Jacobs Landing at a pretty perch and picnic area overlooking the Silknit Dam and old mill pond. Find an ideal lunch spot at 29km mark with inside or outdoor dinning at the relatively new Four Fathers Brewery, located in a unique heritage landmark building. 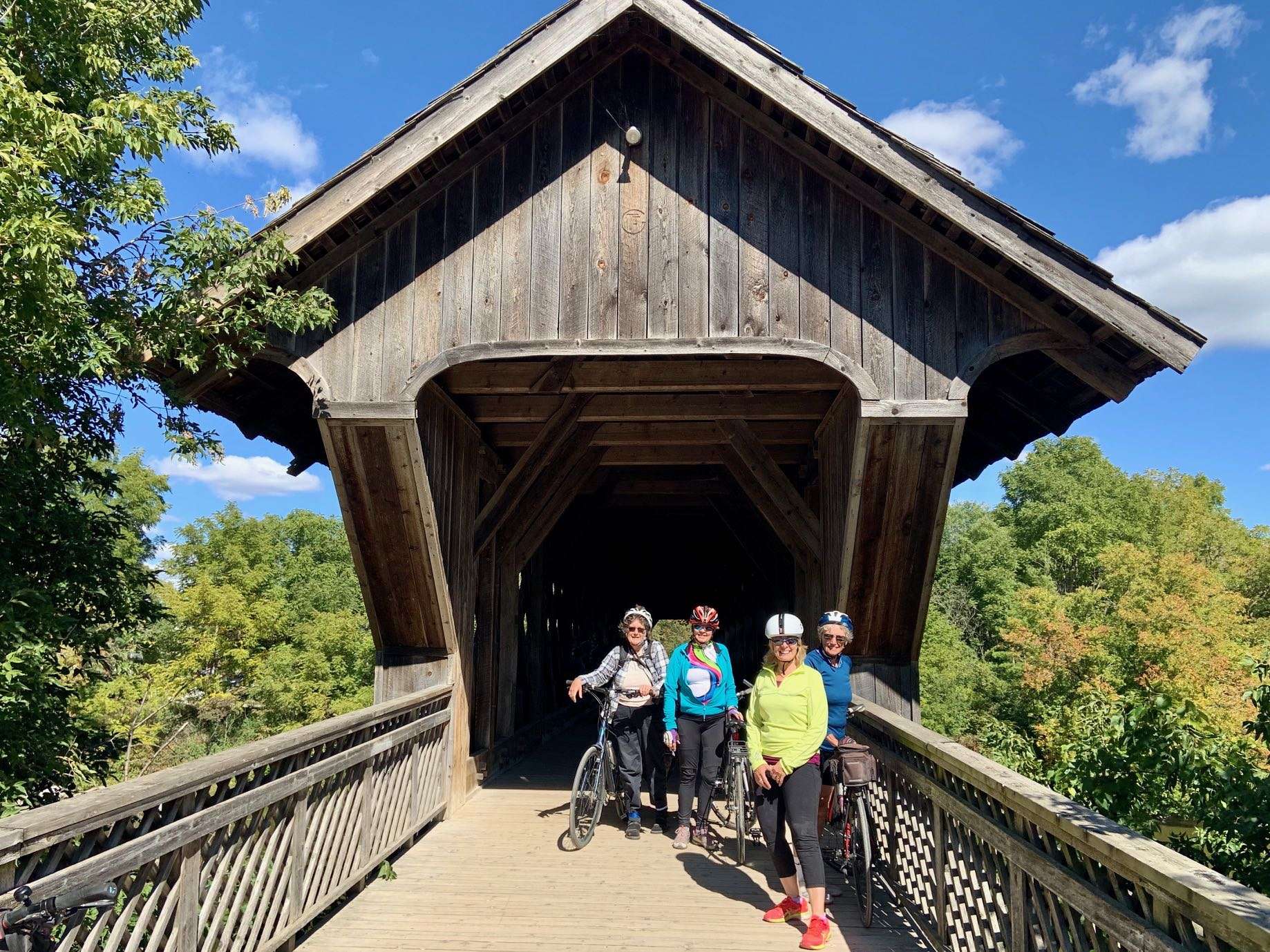 Rounding out day two for a day total of 53km, the 26km ride from Hespeler follows a zig zagged route to the north east, on a series of surprisingly quiet country roads into the more urban centre of Guelph. Enjoy a slow amble and trails that criss-cross the Speed and Eramosa Rivers through a series of idyllic riverside parkland settings. Round out the ride with a walk over the beautiful lattice covered bridge and roll through the wide downtown streets to marvel at the collection of well preserved limestone buildings.

A perfect mix indeed. The Waterloo Guelph Explorer is worthy of its name and time well spent getting to know this wonderful part of the province.