A Weekend of Smooth Spinning in Southern Georgian Bay 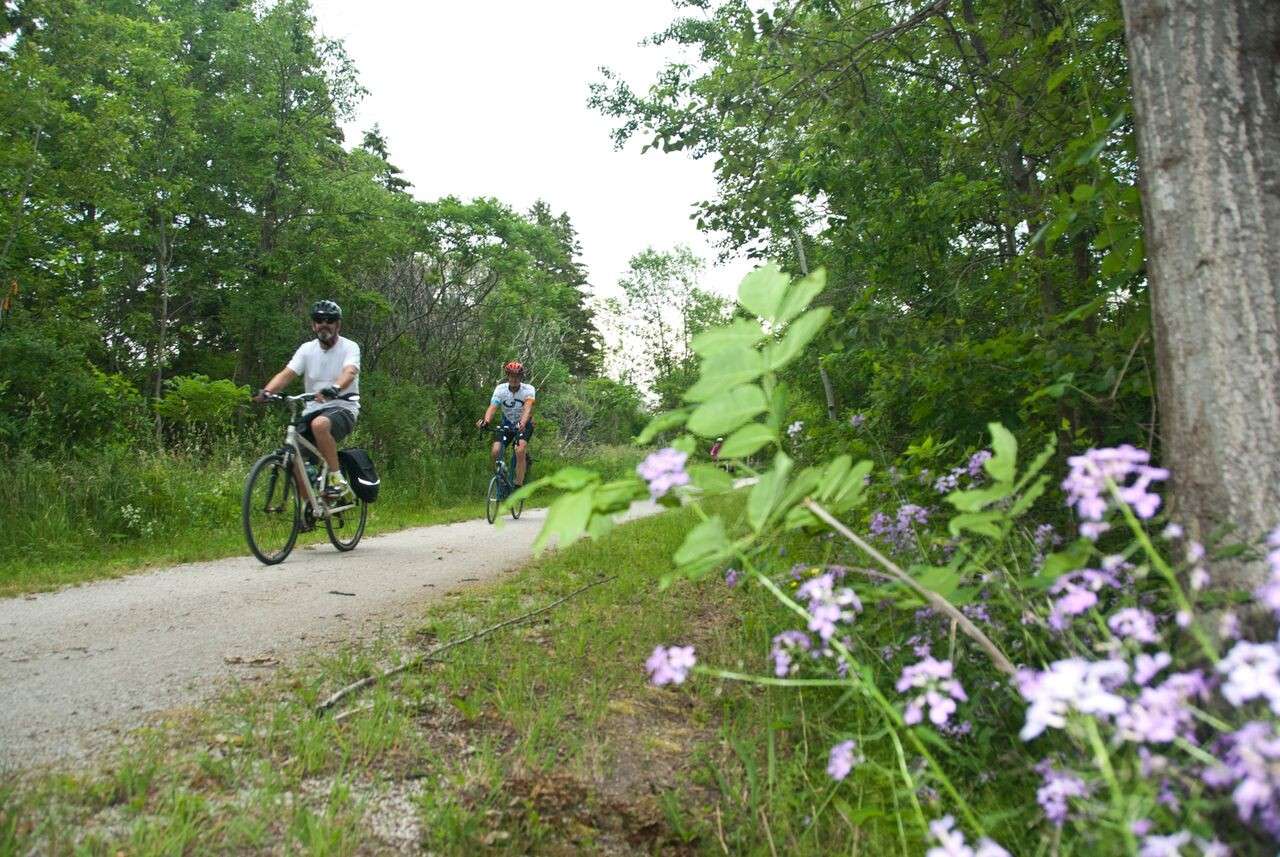 It’s somewhat human nature to obsessively check a weather app the week prior to one’s holiday. As we approached the June 17-18 weekend, and the first Ontario By Bike Ride of 2017, we were willing the sun to persevere and to push away the severe thunderstorm warnings for Simcoe and Grey Counties. Regardless of what Mother Nature would throw at us, we were excited to embark on the new Georgian Bay Explorer route with a sold out tour along nearly 100km of rail trails and quiet rural roads throughout southern Georgian Bay from Stayner, through Meaford to Owen Sound. See the routing here.

The group met in Stayner on Saturday morning, at Station Park and after check-in, introductions and a briefing for the day, the group quickly set off, connecting to the Clearview Collingwood Train Trail. The trail is a well-maintained, crushed stone and converted rail bed and was our route for the first 14km north into the town of Collingwood. 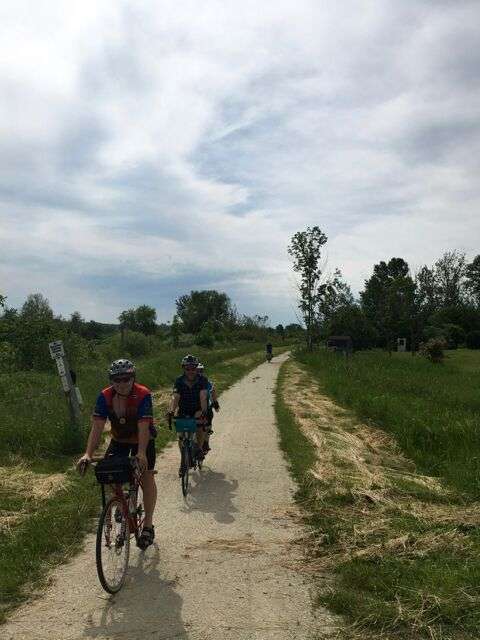 The natural beauty of southern Georgian Bay wasn’t lost on any of us, as we began cycling towards Collingwood. As we rode into Collingwood and our first rest stop, Collingwood’s seasonal Farmers’ Market we were greated with fantastic Bike Valet! Part of an Ontario 150 Celebrate by Bike partnership with the Town of Collingwood, this bike parking service was in place at the farmers’ market for all weekends in June and July 1st. It made arriving at the farmers’ market easy and convenient. 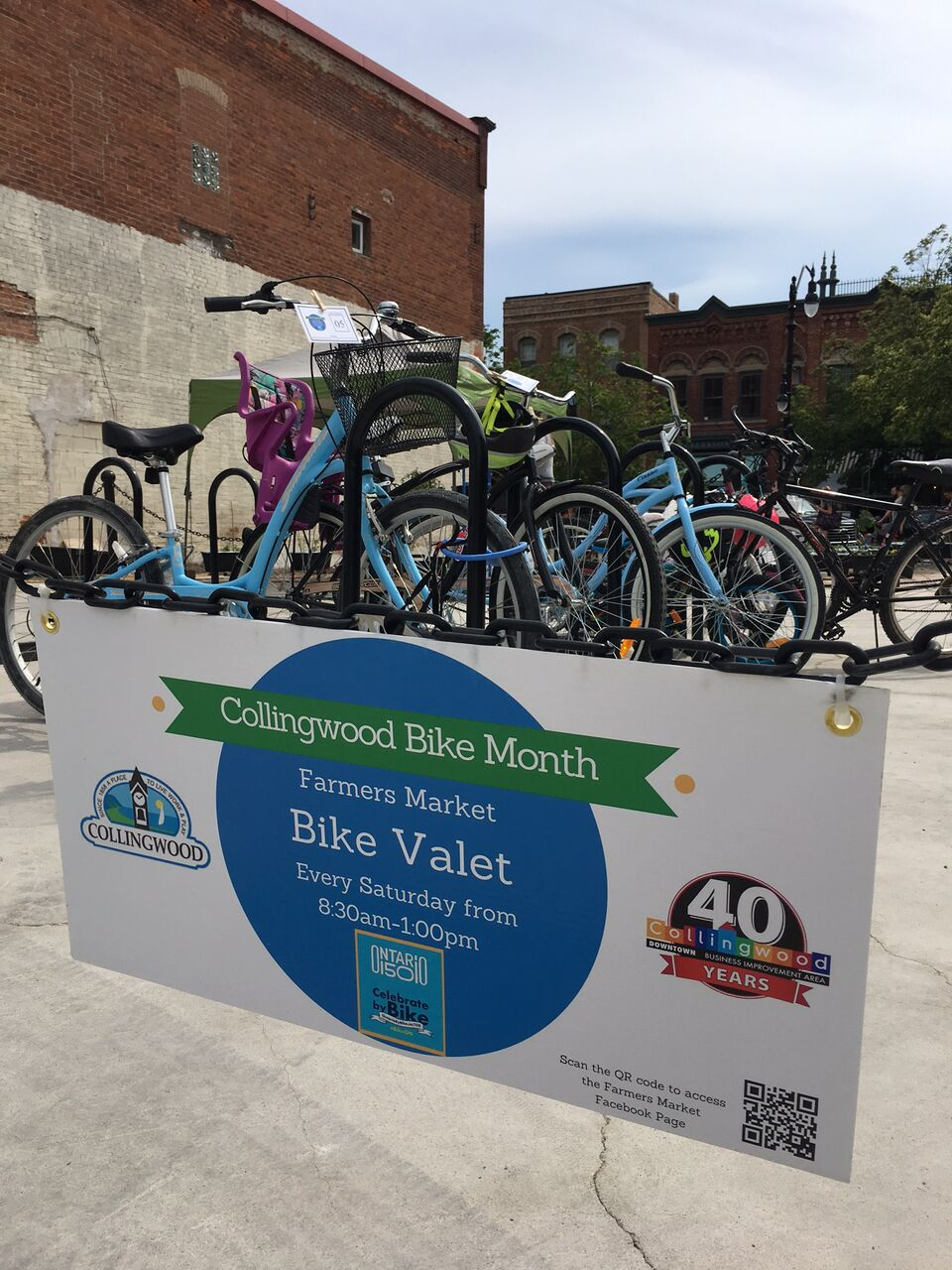 After travelling city trails through Harbourview Park in Collingwood, we connected to the Georgian Trail, a 34km rail trail between Collingwood and Meaford. 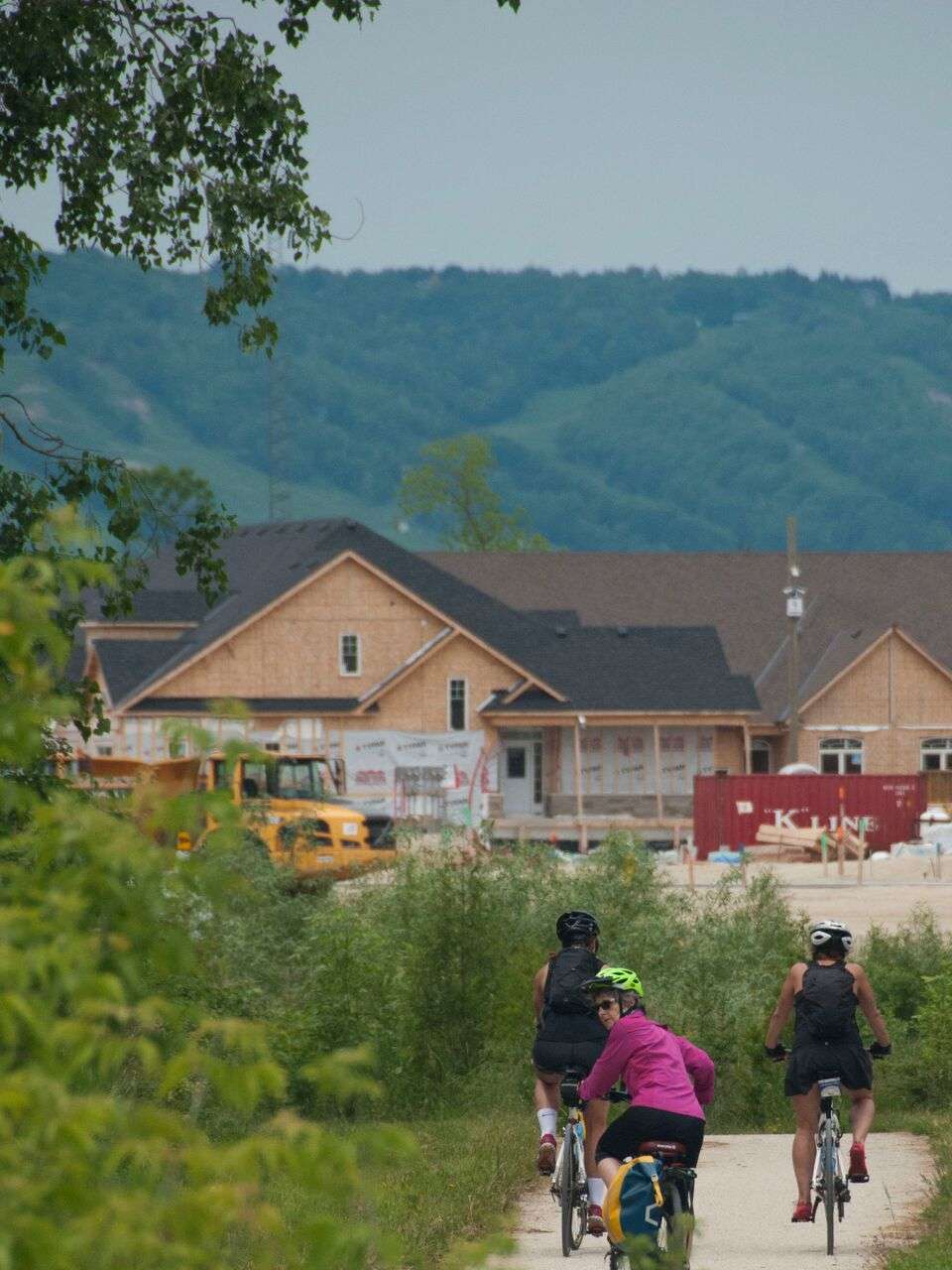 At Shale Rock Coffee House, our lunch stop for the day, we were greeted by great staff with fabulous packed lunches. Located about half a kilometer west of Northwinds Beach on Georgian Bay and backing right on to the Georgian Trail, it makes a perfect stop to eat in or take out and eat lakeside. 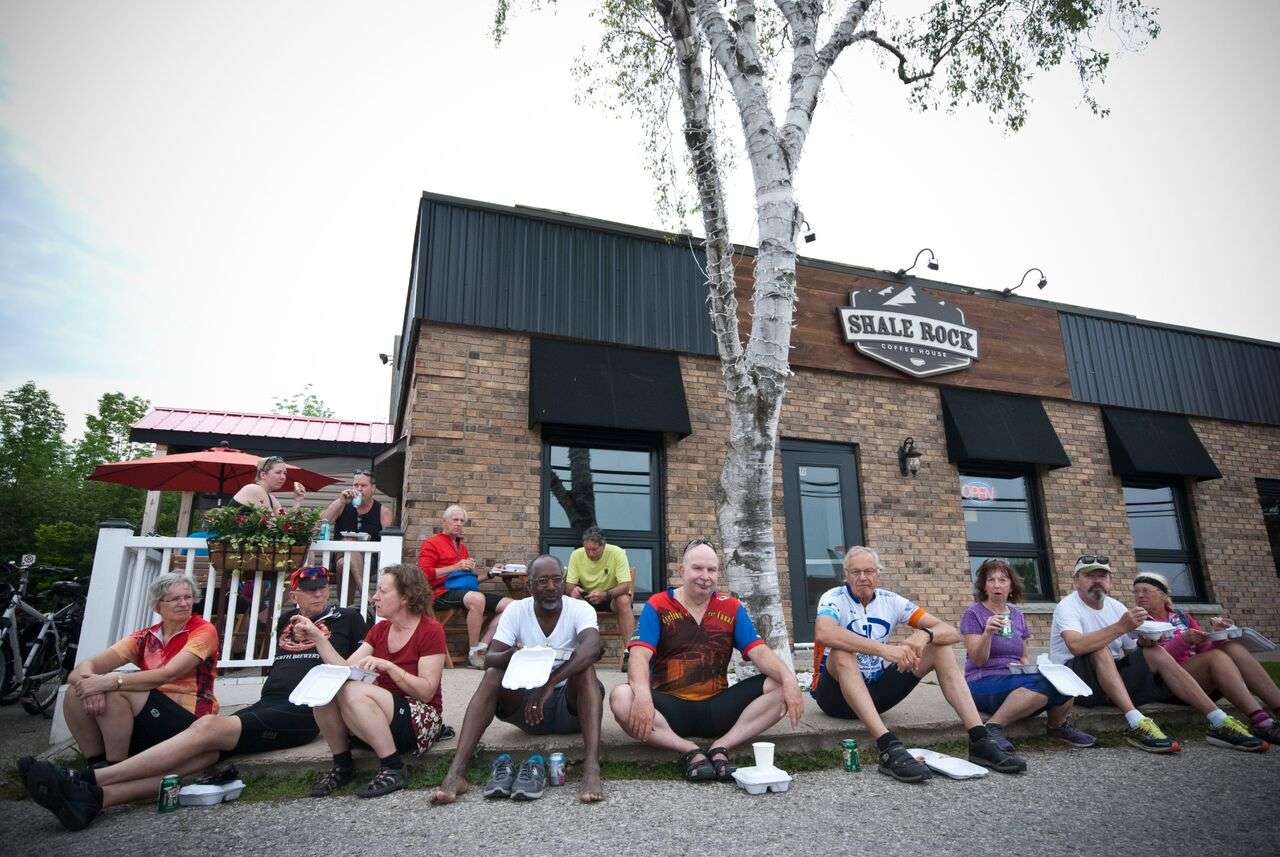 With dark clouds approaching from the west and a few foreshadowing raindrops, we set off again on the Georgian Trail towards Meaford. 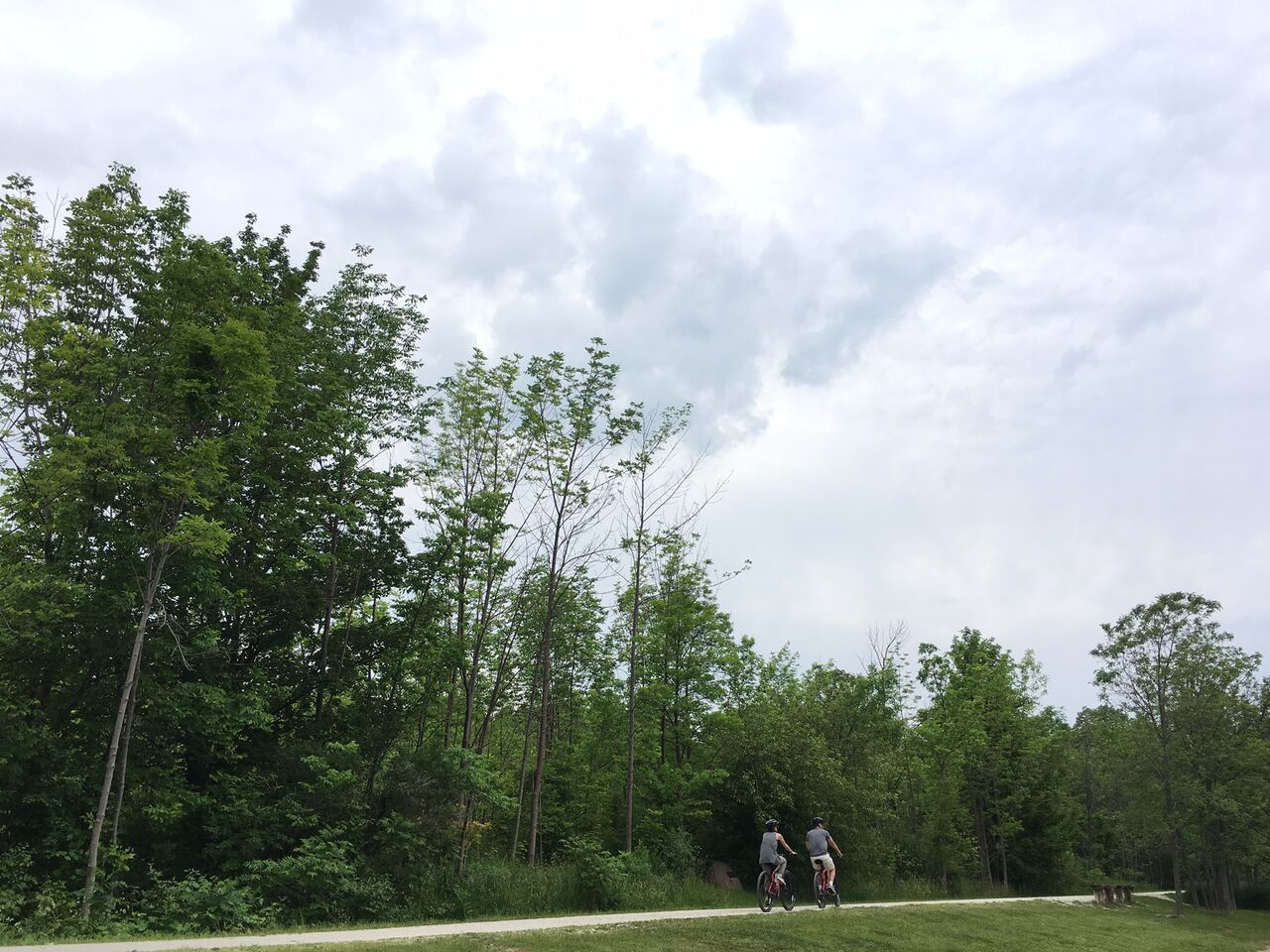 Known as one of Ontario’s best apple growing regions, Grey County offer visitors plenty of chances to taste these fine fruits (See Apple Pie Trail). Pulling into the town of Thornbury, many of our guests (and us too) stopped in at the newly opened Cider House and Tap Room at the Thornbury Village Cider House and Brewery. Located 20 meters from the trail, there is plenty of bike parking at this certified bicycle friendly business, one of a many in town. After a quick tasting, we rode on and over Beaver River and the trestle bridge in Thornbury. The remaining stretch of the Georgian Trail was particularly stunning, with the Escarpment cutting close to the trail on the south-side and aged apple orchards off to the north. 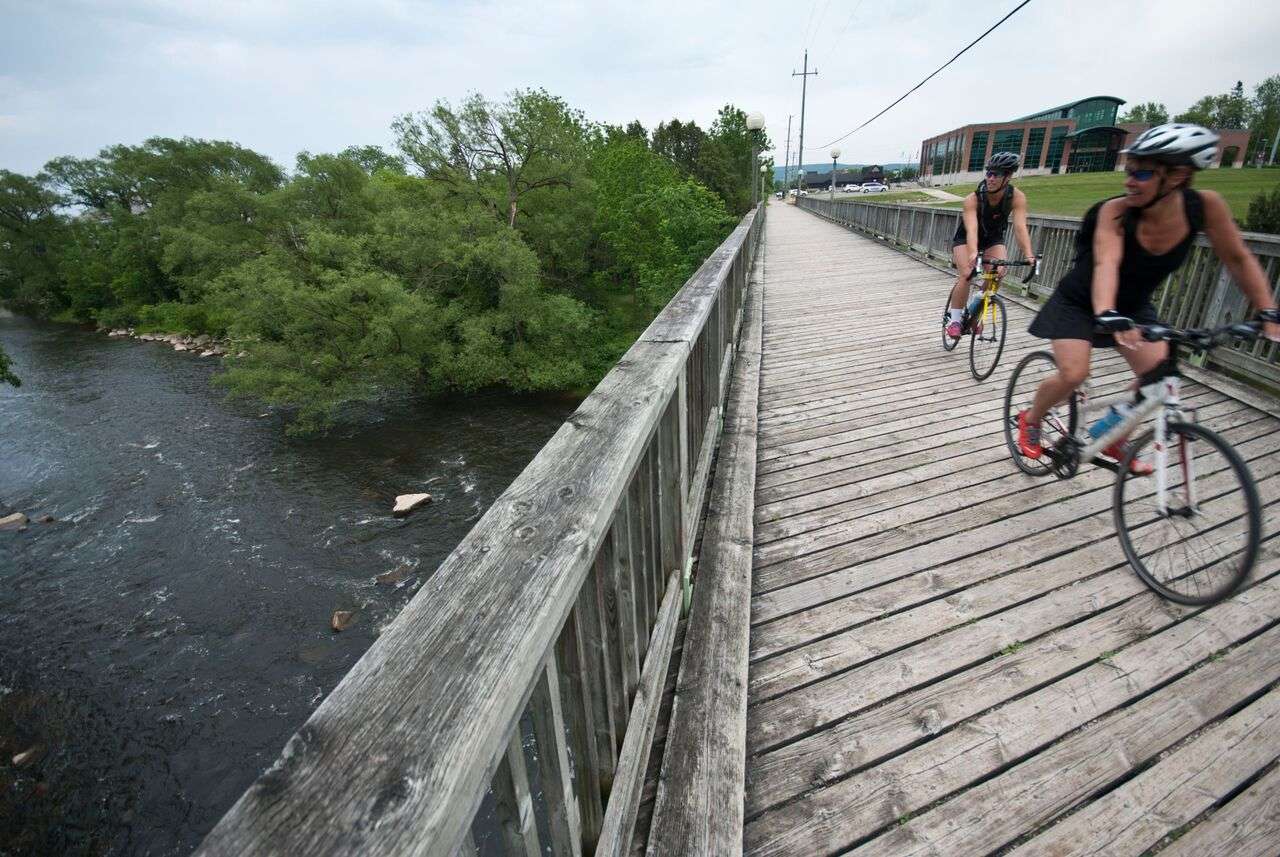 Arriving in Meaford at the end of Day 1 we were all pleasantly surprised that the rain and thunderstorms had held off. The trailhead ends adjacent to the harbour with a short jaunt of road riding into downtown. The evening was free for guests to settle in at their accommodation and to find their way to the great restaurants in town. It wasn’t more than a few hours that those dark rain clouds finally let loose. It was a torrent of rain, but luckily most were already inside and getting settled into dinner at places like the Leeky Canoe, Andrew’s Roots and Gio and Fran’s Italian Eatery. 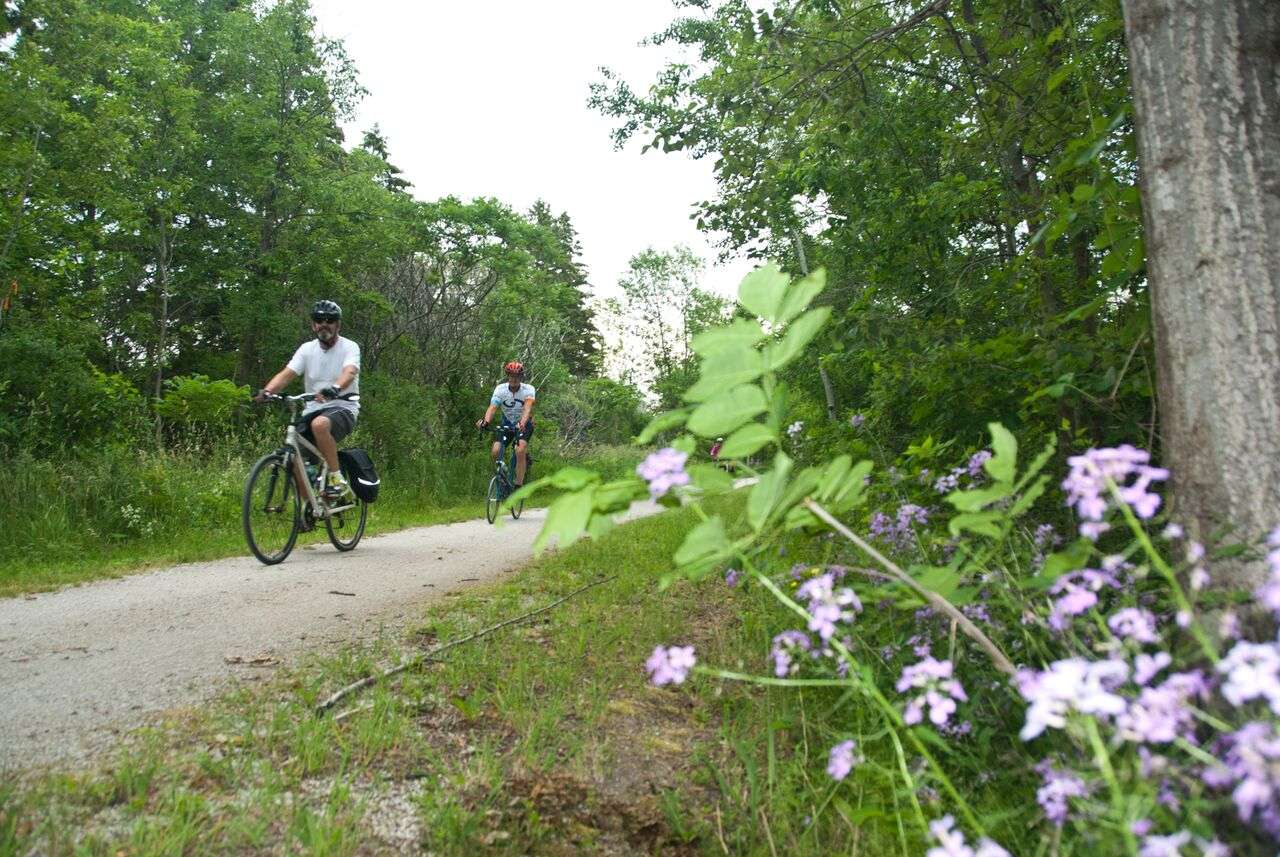 As the group gathered for breakfast the next morning, the talk around the tables was the thunderstorm and another batch of torrential rain that hit around 5am. Despite breakfast being delayed (apparently the kitchen and servers was down a staff), the sunny weather kept spirits high. Groups headed off at two separate times and began the road-riding portion of the weekend. With those ever-present thunderclouds still looming, many spoke of the surreal feeling in the morning of riding the hilly rural landscapes with views of escarpment and countryside. Others were not as fond of the recently saturated hilly gravel roads, but all would certainly be pleased when we arrived at our lunch stop. 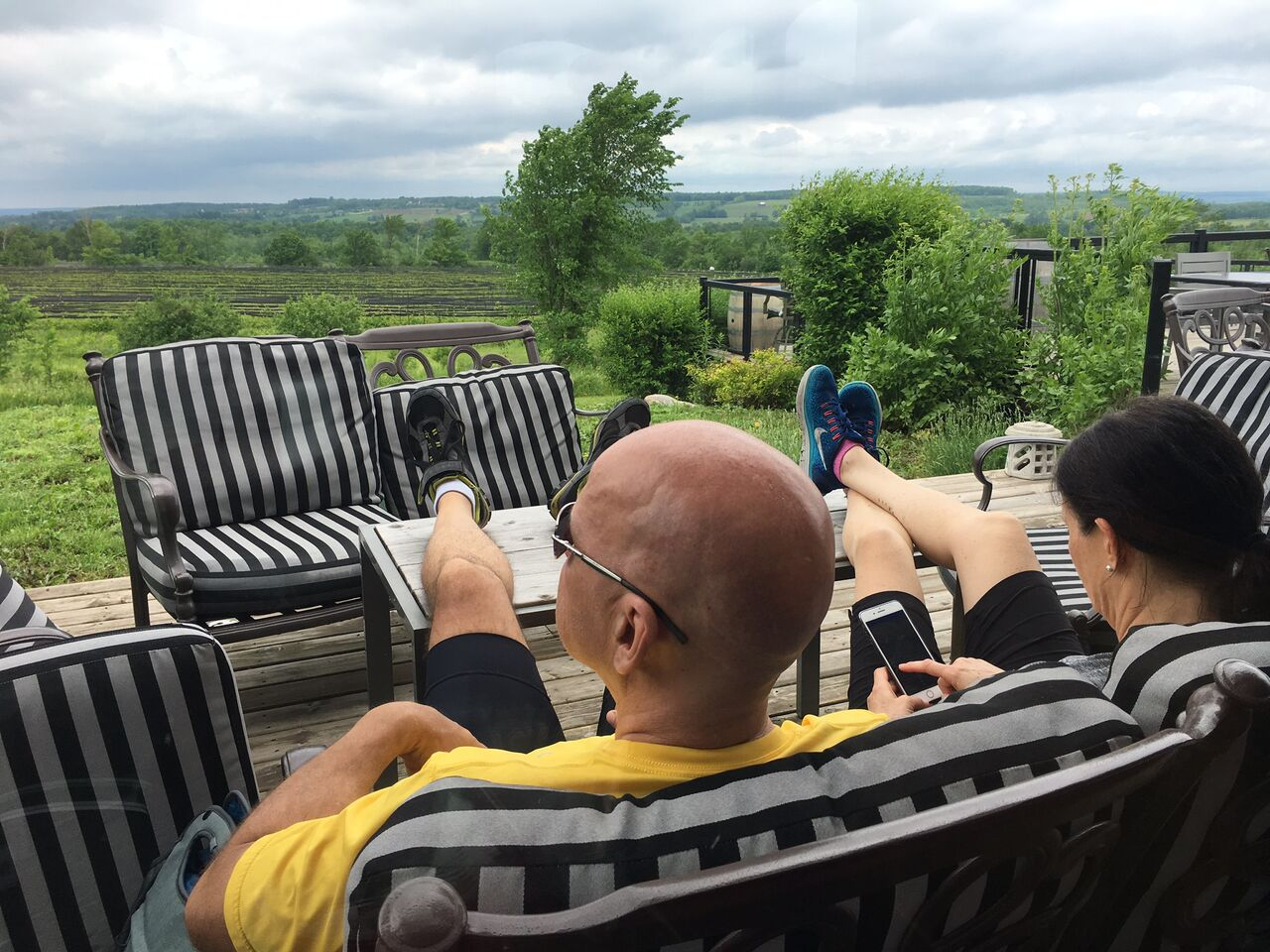 Coffin Ridge Boutique Winery was certainly a highlight. A hearty soup, local cheeses, cured meats and fresh baguettes all complimented the stunning views over Georgian Bay and Owen Sound. Part of the pleasure of the Ontario By Bike Rides is that guests ride at their own pace. While not of the entire group, we were able to capture this shot of some of our riders before they sped off to Owen Sound. 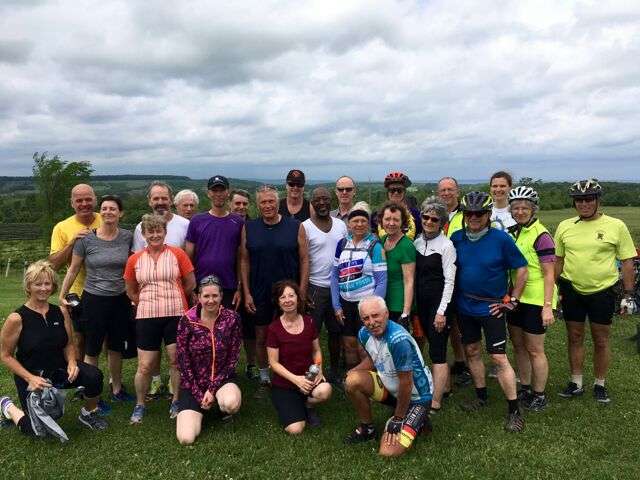 Riding into Owen Sound, the rain we anticipated all weekend came with heavy showers as most of the group was about 10km out of town. When the clouds broke, it brought lots of sun; lightening the mood and warming bodies too! A change of clothes was in order for all, but everyone was thrilled to have completed a fantastic weekend of riding in Simcoe and Grey Counties and what has to be one of our favourite Ontario By Bike Rides yet!

Interested in riding this route and exploring southern Georgian Bay on your own or with your own group?

About the Author: admin