Bluewater International Granfondo: The Story about a Community Living Well and Dying Well

It was December 2015, on a cold brisk morning, when a few cyclists gathered at a local cafe that the Bluewater International Granfondo (BIG) was born. The goal was simple; to get more people off the couch and active in our community; to promote exercise and comradery; to showcase the beauty of Sarnia-Lambton; and to hopefully raise money for palliative care. Within four years, BIG has had an impact far greater than anyone could have imagined.
It is changing people’s lives and building a tremendous cycling culture in a Southwestern Ontario community. In 2018 BIG was voted top GF in Ontario and #2 in Canada by Granfondo Guide and has sold out every year since it’s inception in 2016. BIG is also helping the Sarnia-Lambton community emerge as a leader in palliative care. 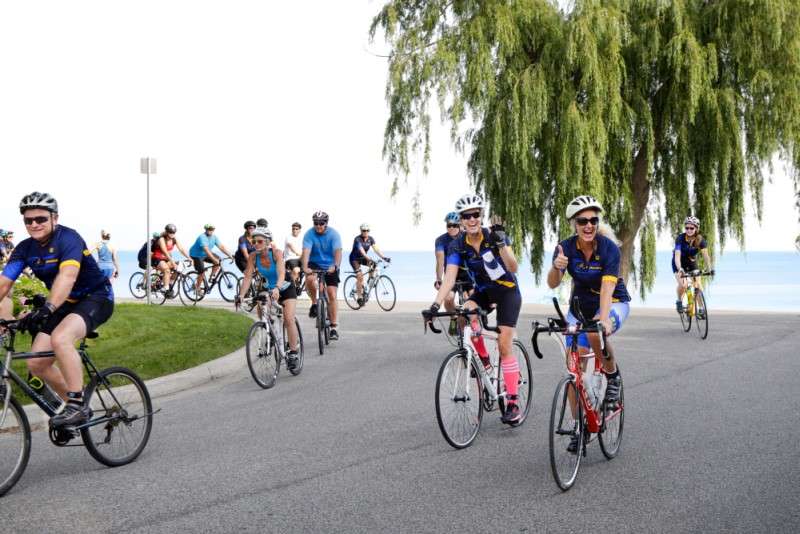 Every August long weekend, nearly 1,000 cyclists from across Ontario, Canada, the United States, Mexico and Europe converge on Sarnia-Lambton to participate in BIG. Some come for serious competition, while others participate strictly for fun or to support palliative care. BIG has grown significantly over the past three years and in 2019 participants will have four routes to choose from, including 30K, 50K, 100K, and 150K. Each route has a dedicated start time specifically designed to avoid mass start anxiety and allow riders of all routes to finish within a reasonable time of each other. Timed sections along the available routes allow for competitive juices to flow while maintaining a focus on rider safety. A highlight for many participants is the opportunity to challenge their ability against the Toronto Hustle, who has emerged as one of Canada’s most prominent cycling teams at any level, garnering attention from the biggest pro-cycling outfits across North America. And, while BIG enjoys a good cross-section of cyclists in all age categories, over half of the participants are over the age of 55. In 2018, four Dutch-Canadian brothers with a collective age of 315 years participated in the cycling event together. Local resident Peter DeGraaf, 82, and brothers Frank, 80, of Collingwood, John, 79, of Orillia, and Dick, 74, of Kitchener plan to return again in 2019 with the hopes of recruiting their younger brother from B.C.

In 2018, BIG introduced the first Ontario First Responders Road Cycling Championship (OFRRCC) to their event. The OFRRCC is open to active and retired sworn and civilian members of the police, fire and paramedic communities and the unique team format allows first responders to enjoy a casual ride or to “ride to win”. The OFRRCC consists of BIG’s 100km route and includes three timed sections (7km, 2km and 9km). 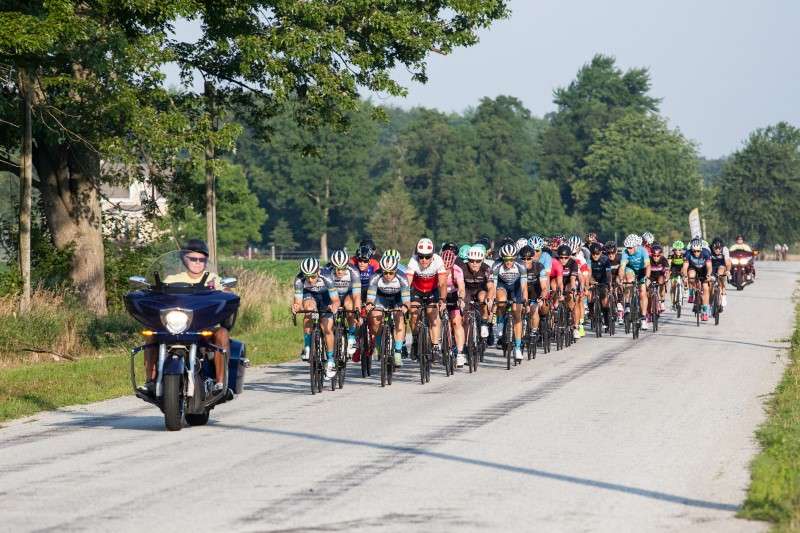 BIG offers more than a signature cycling experience. Finish line activities include a post-ride celebration on the shores of beautiful Lake Huron for participants, family, friends and volunteers. Cyclists can cool off with a refreshing swim in Lake Huron, drink a well-deserved Cowbell craft beer (along with other refreshments), and enjoy a delicious post-ride meal; all while relaxing to live music performed by local band Offsite Impact, one of Lambton County’s favourite bands.

When BIG was first created, it was hoped that organizers could help to build a strong cycling culture in the local community. In 2017, the organizing committee decided to add a 12-week training program to help local cyclists prepare for the annual cycling event. Today, more than 220 cyclists meet up at Blackwell Cycle every Monday and Wednesday night from May through August to participate in the BIG training rides. The training program has had a profound impact on the local cycle culture where Sarnia-Lambton has seen a significant boost in cycle tourism and local bike shops are experiencing record sales. Many first-time riders have gained meaningful new friendships, developed practical skills and emerged with a new found passion for cycling. None of this community impact would be possible without the generous support of more than 200 businesses and volunteers who contribute to the success of BIG with their time and resources. 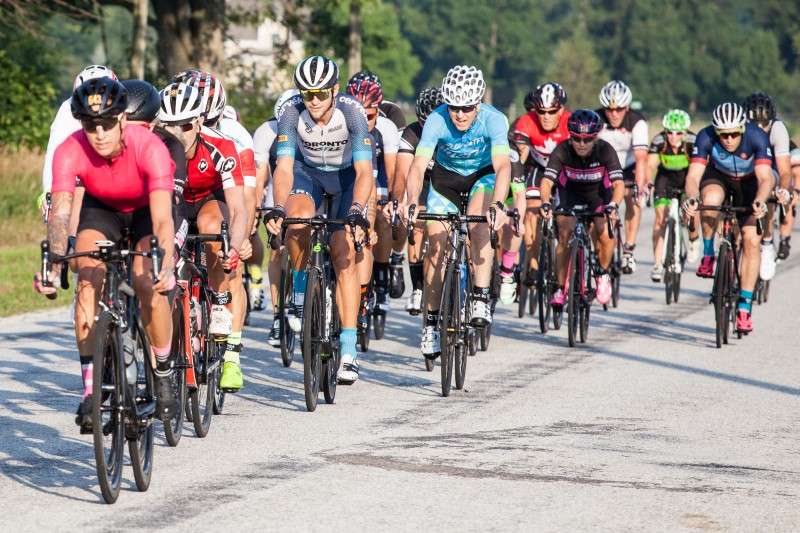 Over the past three years, BIG has raised more than $140,000 to support world-class palliative care education for nurses, social workers, personal support workers and volunteers in Sarnia-Lambton. In 2017 BIG funded the First Local Palliative Care Retreat in Grand Bend, Ontario. Over 105 medical professionals, comprised of physicians, nurses, nurse practitioners, social workers and pharmacists, attended the inaugural event. In 2018 BIG funded a new palliative care education scholarship for Lambton College nursing students and in 2019 BIG will be funding the 2nd Palliative Care Retreat in Grand Bend where more than 200 attendees will learn from a number of world class speakers in the field of palliation. Coincidentally, at the same time that momentum for BIG was growing, Sarnia-Lambton MP Marilyn Gladu, an avid supporter and participant of BIG, introduced a Private Member’s Bill on Palliative Care that received royal assent in May 2017 and will soon become law. C 277, an Act providing for the development of a framework on palliative care in Canada, will ensure that people can die with dignity surrounded by professionals who are committed to their journey.

The 2019 Bluewater International Grandfondo will take place on Sunday August 4th. For more information about the event visit www.bigf.ca

Learn more about the ride from the following videos: 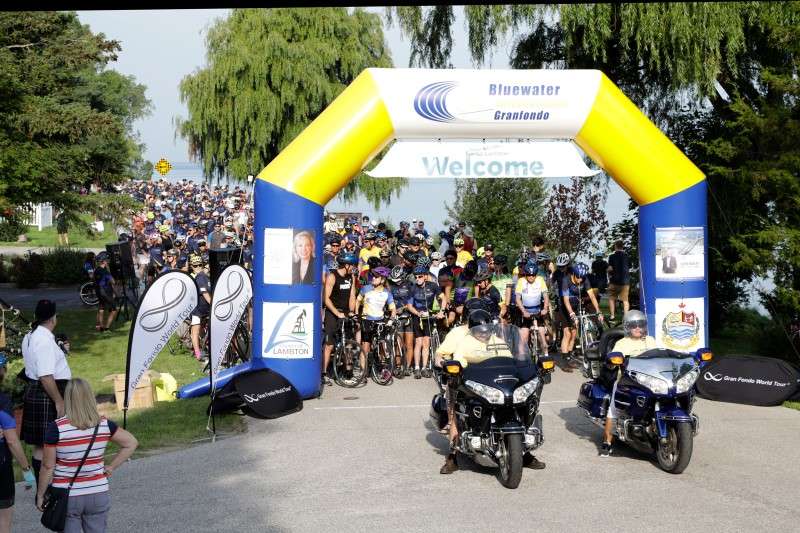