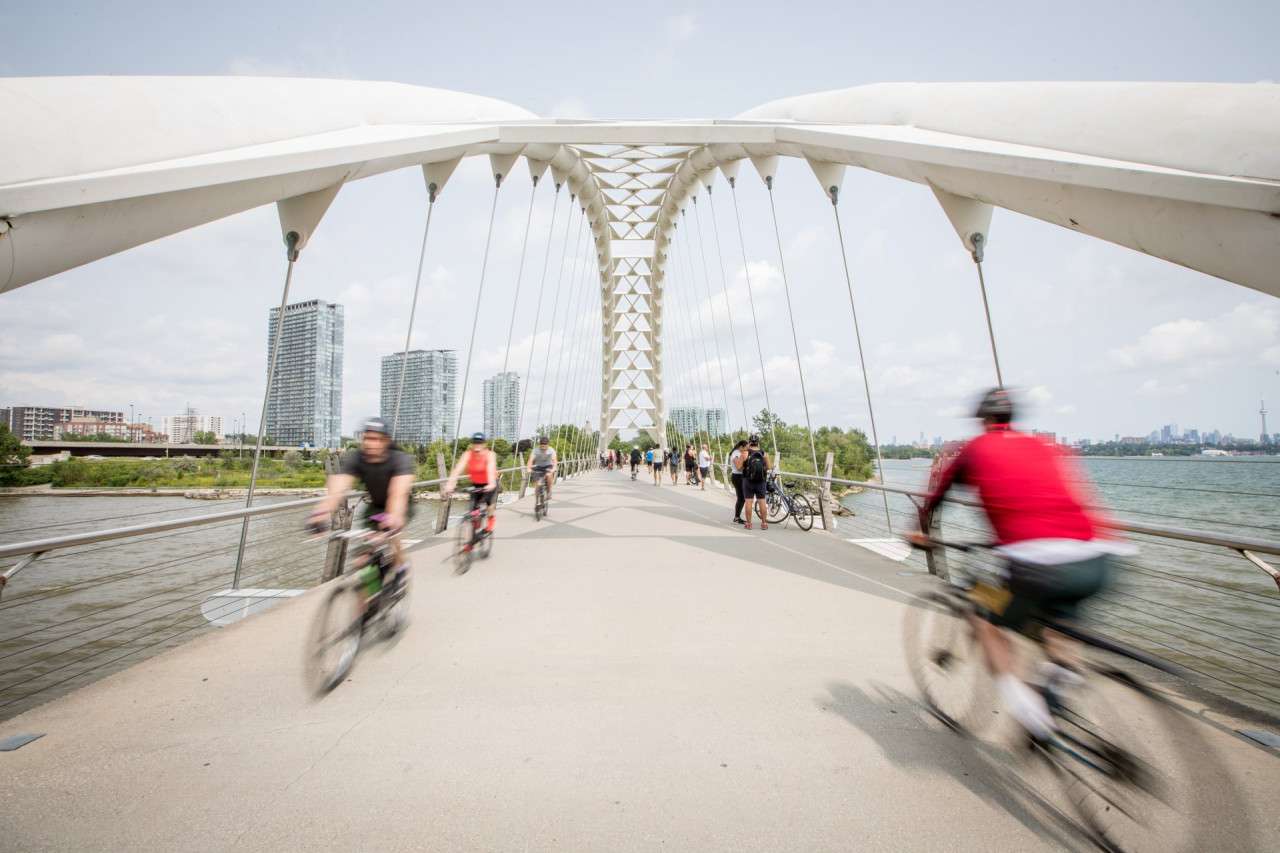 Summer hits Toronto hard, sending Torontonians out into the streets and parks to eat, drink, and be merry, making the most of the season. And there’s usually a bike in there somewhere, too.

Toronto is joining the world’s great bike cities with streets increasingly lined with bike lanes, drivers accustomed to sharing the roads, and now over 6,850 bike share bikes plus 300 new ebikes, a part of the ever-expanding system. With just one incline of any size, between Dupont and Eglinton, it’s one of the most accessible bike cities outside of the Netherlands. 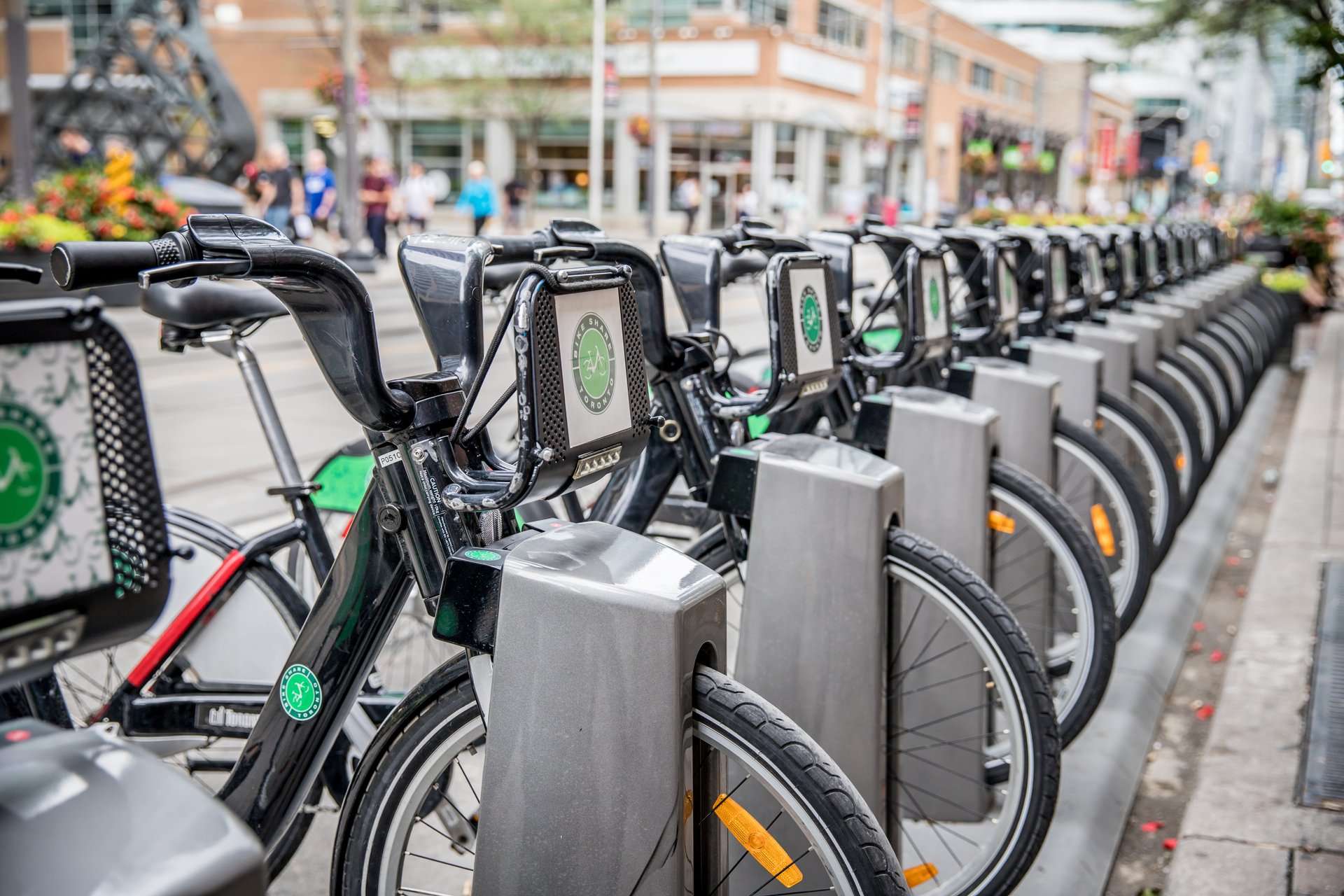 Thanks to a nice little city bylaw, ever since the city’s remarkable condo boom started in the early 2000’s, there’s been a public art renaissance throughout the city. Toronto of the 1970’s and 80’s was a city dominated by the cutout realism of Michael Snow, Kosso Eloul’s striding blocks, and William McElcheran’s sensitive distillations of the stereotypical Toronto businessman.

Now, some of the city’s most eye-catching sculptures are the comic-ironic pieces by Douglas Coupland, the Canadian artist/novelist who gave the world Generation X, though it’s Graffiti Alley—conveniently located just behind the busy Queen West strip—that’s really captured the international imagination. 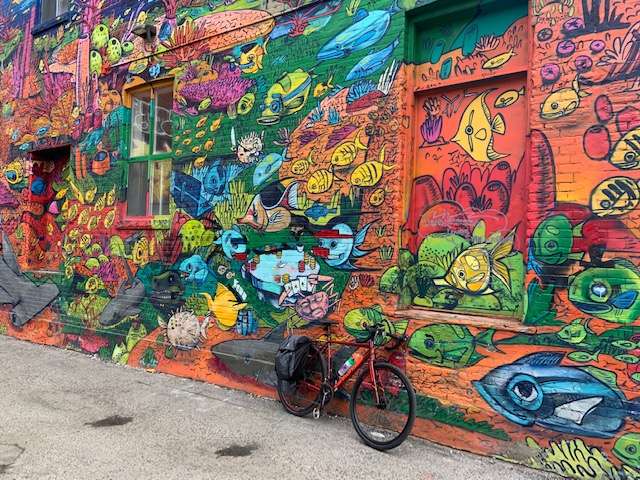 But bikes are not only a good way to see the city, it’s a great way to taste it, too.

In addition to the easily navigable city streets, there are bike-specific paths throughout the city, and really a lot of street art everywhere. Some of the paths lend themselves better to food en route than others, but bars, restaurants, and food pop-ups of one sort or another are so thick on the ground, there are a lot of bike food options.

The city’s best bike-food matchup may be a stop at Rooster Coffeehouse on Broadview across from Riverdale Park. From here you can take your cinnamon bun, cross the street, set your bike down, and take in the single best view of Toronto’s downtown skyline at the top of what becomes Toronto’s single best toboggan hill each winter. After a brief stop hop back on your bike and head down into bike trails that will remind you of just how verdant urban valleys can be. 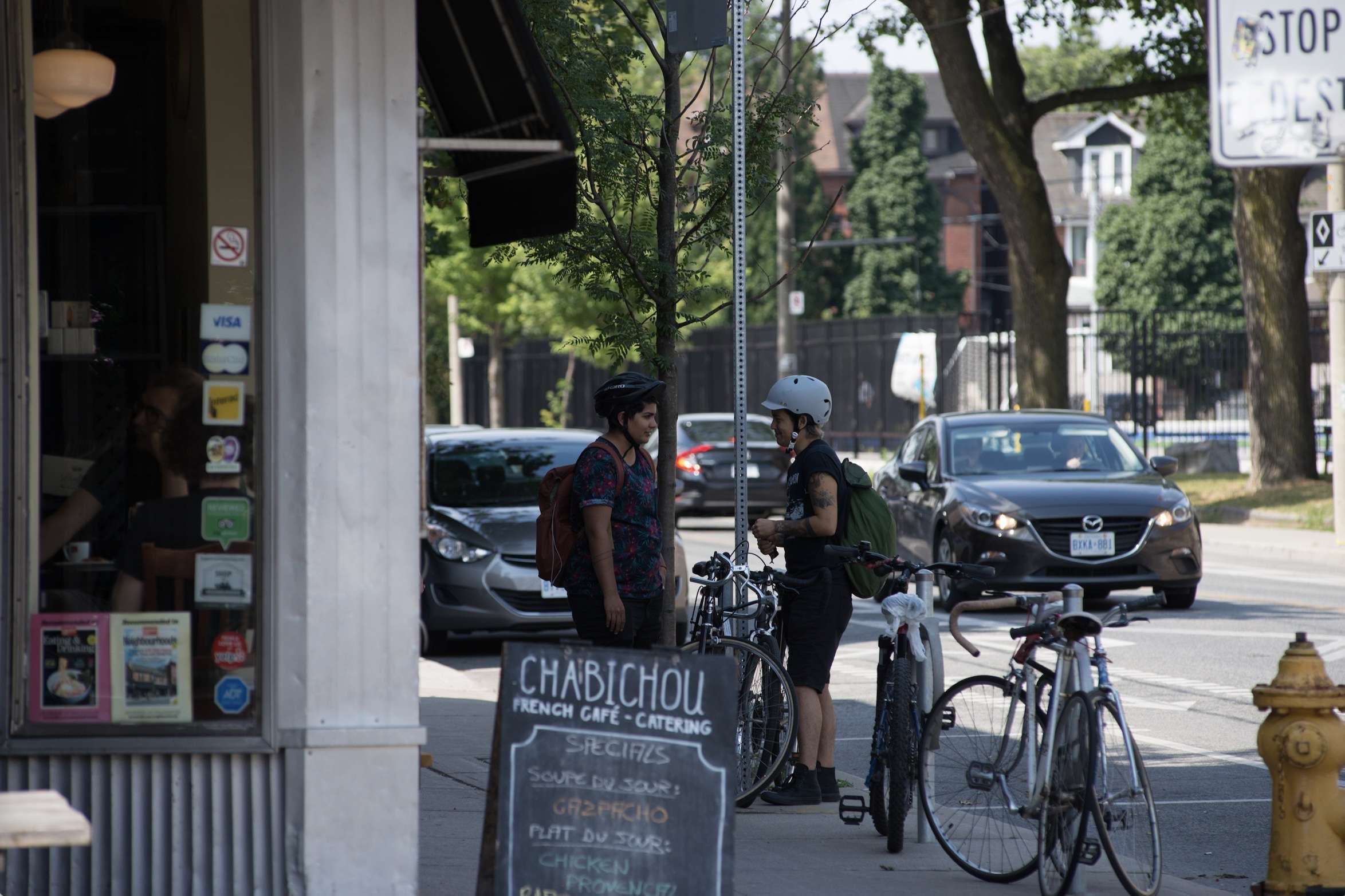 While on the Don Valley Trail, keep an eye out for Duane Linklater’s Monsters for Beauty, Permanence, and Individuality, a series of cast concrete sculptures interspersed among the foliage.

Officially known as Tommy Thompson Park, for the Group of Seven painter, this is the route to take to run into Toronto’s cycling elite on their long but leisurely rides between Iron Man competitions and transcontinental expeditions.

The Spit itself is made, charmingly, from the detritus of the excavations and demolitions of decades of Toronto’s biggest developers making it a work of found art. Just to the north bike to the Canary District, named not for London’s Canary Wharf (built by the Canadian Reichmann family), but for the Canary Diner that used to be where the detritus-dumpers would stop for their early-morning coffee and home fries. 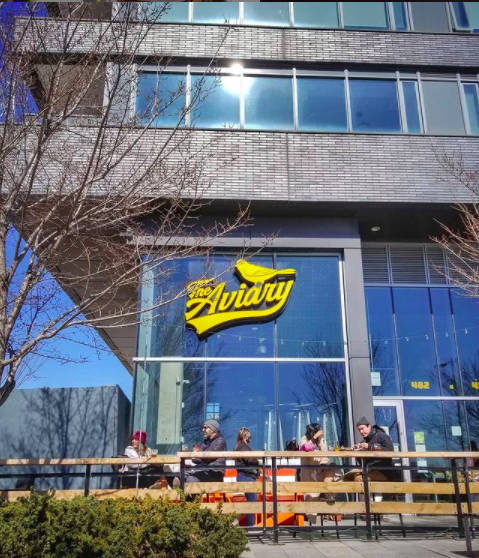 That’s long gone, but the District is now home to the Aviary Brewpub and Souk Tabule, and the Garden of Future Follies, a sculpture garden of work by Hadley + Maxwell.

While less a bike path and more a busy city street, Queen West is where some of the most interesting restaurants are, and where you’ll find Graffiti Alley.

You could cycle up, get some gelato from Scarlett (571 Queen West, you can’t miss it: in the summer, there’s a DJ out front on the sidewalk). Have a drink at Bar Karma (512 Queen West, there’s probably some music coming out of there, too). Enjoy a fancy frank from Fancy Franks, a restaurant that seems like it’s a big chain but is actually a born-in-Toronto four-location minichain. After bike around the interlaced set of alleys nearby and see new and old murals and tags from ELICSER, Uber5000, and many others.

A British sculptor with no biographical connection to Toronto, he took a liking to the city (i.e., the city’s collectors took a liking to him), and in addition to the expansive collection at the AGO, there are two monumental works in fairly close proximity you can bike between and picnic beside. 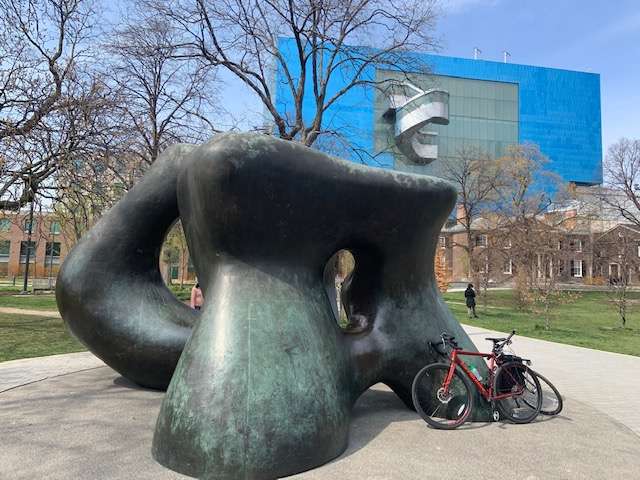 You can start at what Torontonians call New City Hall, to distinguish it from Old City Hall next door, despite the fact that new here means “open before Joni Mitchell even heard of Neil Young”.

Go west along Queen Street and pick up some butter chicken from Little India Restaurant to eat in Grange Park behind the AGO.  The parks’ centerpiece is Large Two Forms, the city’s most iconic Moore, the piece that gave at least four generations of children their first encounter with modern sculpture by climbing through it, sliding down it, and hanging off it. The Moore’s also aren’t far from Old Chinatown, which offers dozens of options for park-ready, handlebar-friendly takeout options.

If you get your bike from Toronto Bike Share, you’ll have a handy carrier for your food. Otherwise, you may want to either invest in a pannier, or bring along a flat-bottomed backpack to carry your meals.