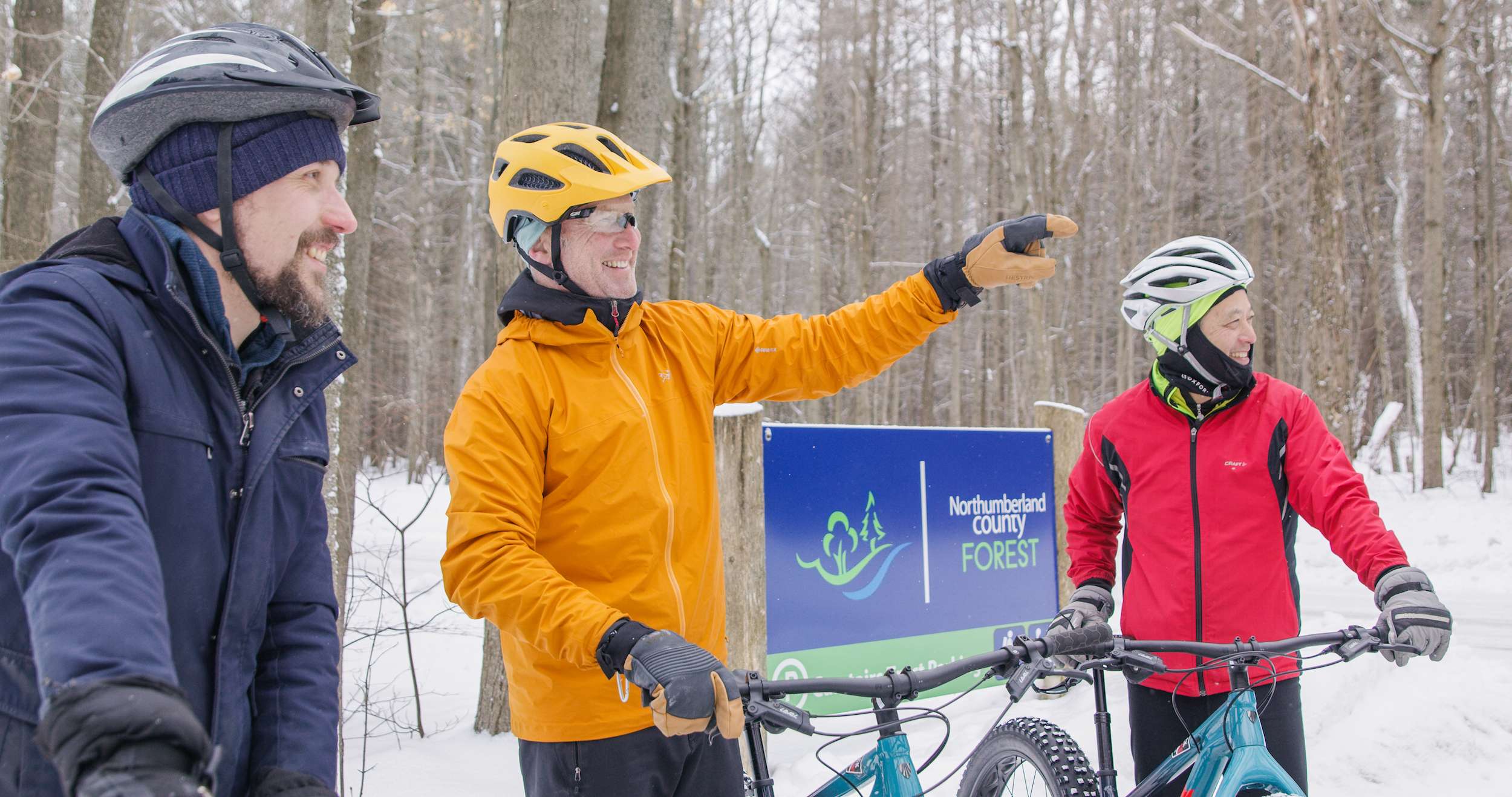 Until this winter, I’d never been on a fat bike. I’d cycled Kawarthas Northumberland thoroughly in the warmer months—the region is crisscrossed with rail trails and backroads that make for shady, serene riding in the summer. Then I was invited to ride some Northumberland County trails on a borrowed fat bike, and my conversion into an all-season rider happened almost instantly.

On a January morning three of us met at Northumberland County Forest. We each had a Trek Farley 5 from the rental fleet of Peterborough’s Wild Rock Outfitters, which were surprisingly lightweight despite their beefy appearance. Even after riding a few circuits of the parking lot, it was clear that seeing a fat bike roll by doesn’t convey the ease you feel when you’re seated on one. A combination of good engineering and wide, studded tires ensures both comfortable pedaling and reassuring traction. About my only complaint was my own doing—I’d worn bulky gloves, which made swapping my hand position on the brakes clumsier than it needed to be. 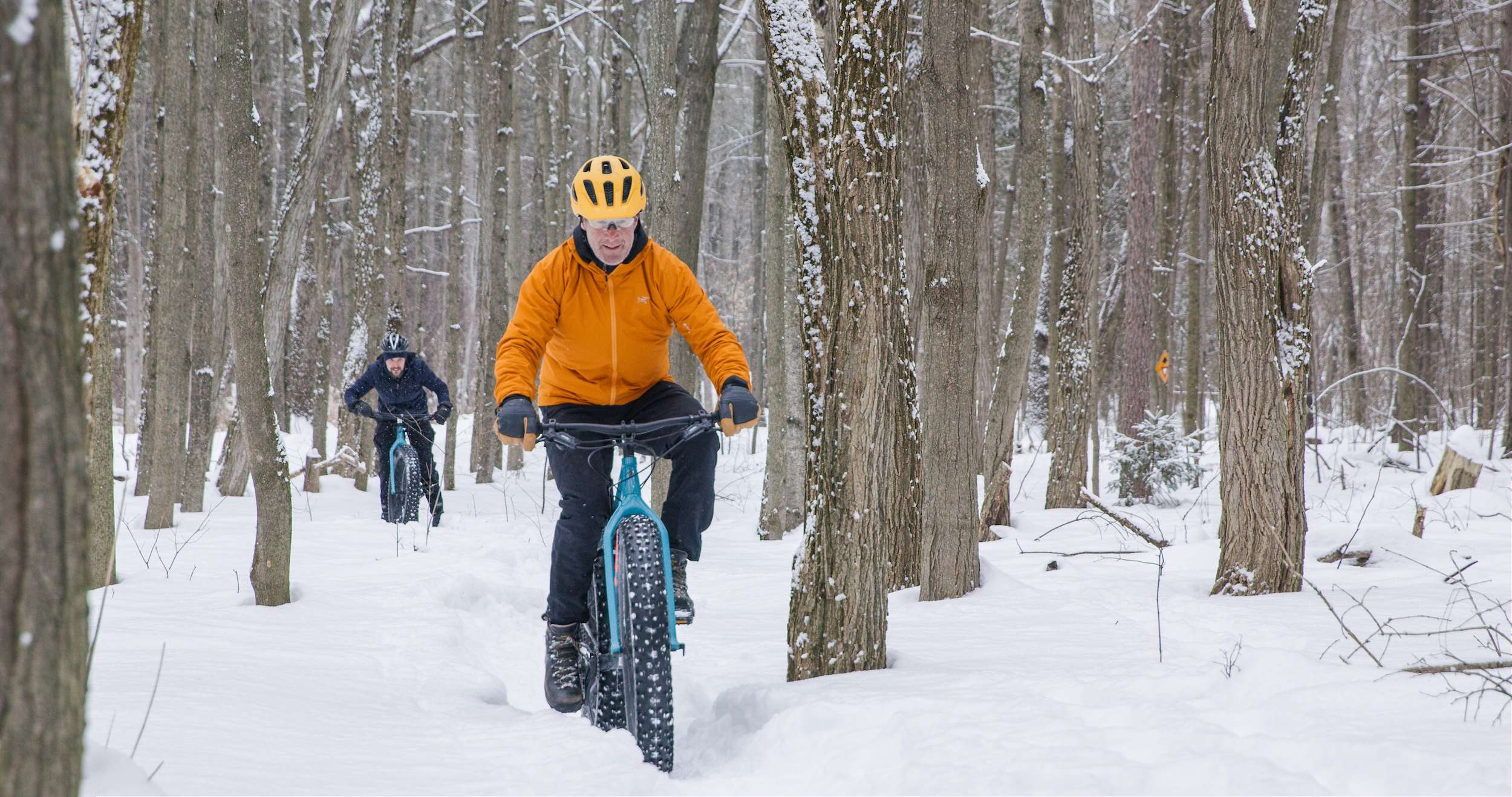 Our plan was to try the Elderberry Trail, a roughly 3km route with a few hills thrown in for excitement. We arrived only a day or two after a heavy snowfall however, and the trail hadn’t been tamped down yet. It was traversable but posed an unexpectedly steep physical challenge, so our group opted for some more easygoing alternatives nearby. A stretch of snowmobile trail made the bike literally sing, as the tires thrummed over packed snow. We were also able to get off-road for a stretch, thanks to some snowshoers who had preceded us and packed down the snow. Even on the narrower trail, I was able to maintain control and a satisfying speed.

I may have been a fat bike newbie, but one of my riding partners was emphatically not. Sean Fitzpatrick is a Wild Rock staffer and longtime mountain biker, and stressed that once you’d mastered the fundamentals, fat biking was a reasonably accessible hobby. “I think a lot of people are into mountain biking before they get into winter fat biking. It could just be a misperception of sliding around in slippery snow conditions. But it’s really just being able to dress for the cold, and being comfortable with the cold,” he said. “It’s just a nice way to get out in the wintertime and ride around.” 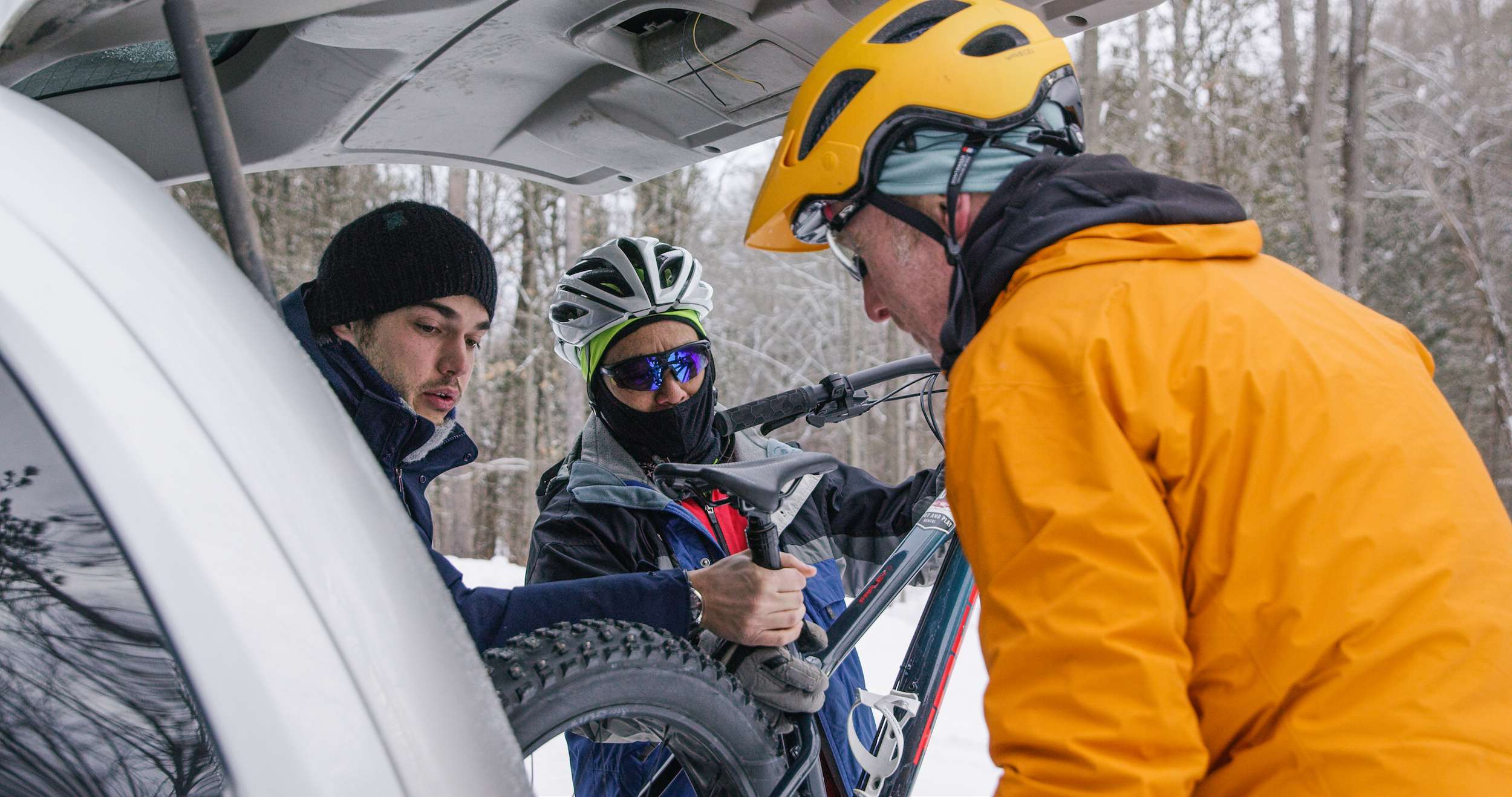 With Sean’s advice in mind, I began making plans for other fat bike rides throughout Kawarthas Northumberland. I’d begun my explorations in a mountain bike hotspot—Northumberland County Forest, and specifically the Woodland Trails. With a series of loops that range from ~3km to 9km, and fewer hills on the shortest loop, the trails are diverse enough to accommodate riders of varying skill levels. They’re also comfortably wide and well-traversed, so the conditions are likely to be conducive to fat biking whenever you go. If you’re looking for a bigger challenge, the Dragonfly, Stonewall and Elderberry trails are single-track with more twists and turns. Just be aware riding can be difficult when the snow is especially deep (as I discovered on my first expedition). 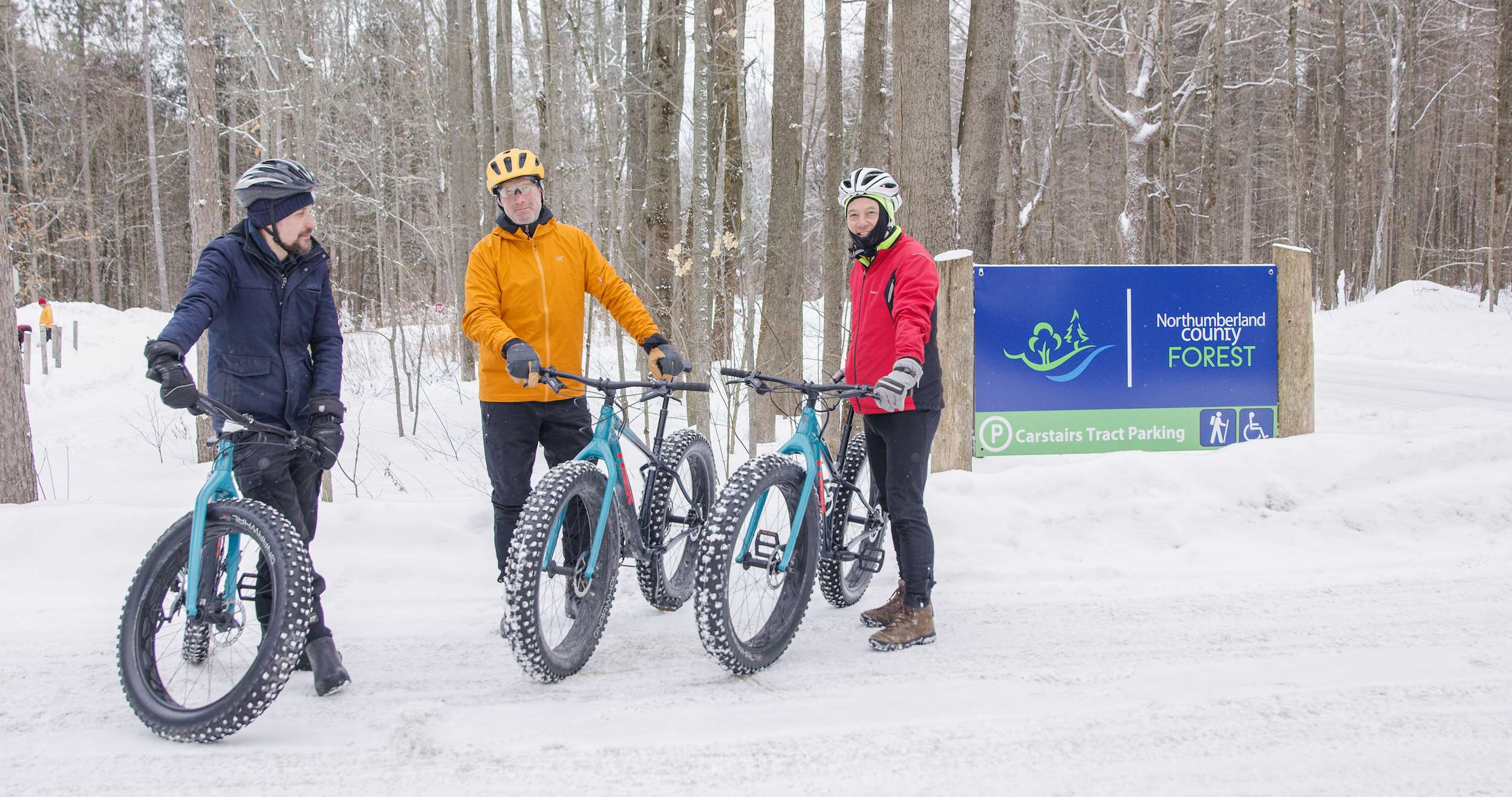 Riders based in Peterborough are spoiled for choice, with rail trails so long you’ll run out of daylight before you run out of trail. If you fancy a mostly flat, comfortable ride, you can head northwest from Jackson Park near the centre of the city towards Lindsay, or southeast towards Hastings. If you’re craving a more mountain bike-type experience, Harold Town Conservation Area is a local favourite. Just be aware some trails are steep, with numerous hairpin turns that will make for a formidable challenge in winter. Not to be outdone, Millbrook is also home to some top-notch fat bike routes. Trails range from highly technical (such as Backstage Pass and Trench Town) to easygoing (the Deyell Detour). 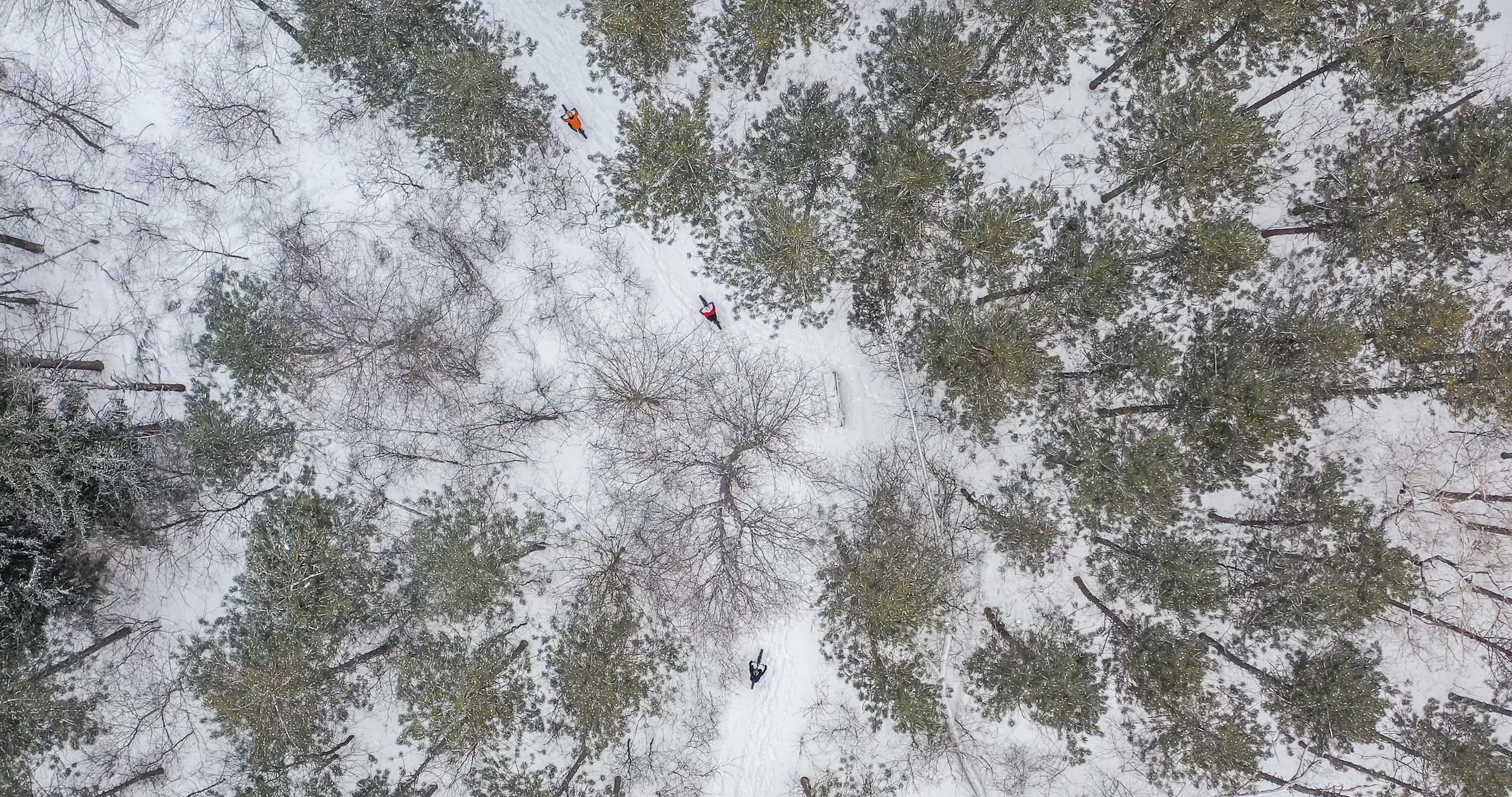 The Ken Reid Conservation Area is an all-season favourite, but fat biking adds a wintery twist. You encounter a few ups and downs along trails like the Dragon Fly and Marsh Lookout Trail, but they’re mostly gentle as opposed to white-knuckle descents. Views across Sturgeon Lake are lovely, and if you’ve got the time, the Victoria Rail Trail can keep you going for quite a while. The complete 55km length runs all the way through the village of Fenelon Falls to Kinmount, passing some of Kawartha Lakes’ most scenic views along the way.

To plan your winter fat biking adventure, visit the links below for information on all-season trails for cycling, cycling routes, fat bike rentals, and things to do and see while exploring the Kawarthas Northumberland region.

Note: Many winter trails are shared use, hence extra caution and trail etiquette is required.
Note: Check ahead for fat bike rentals as some locations are not offering rentals during Covid. 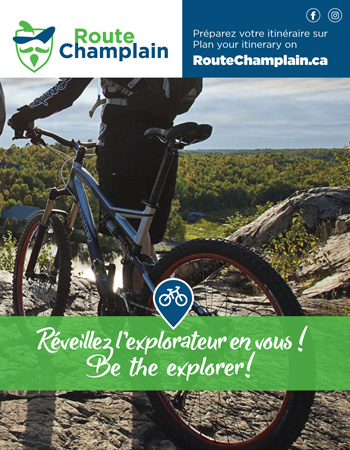