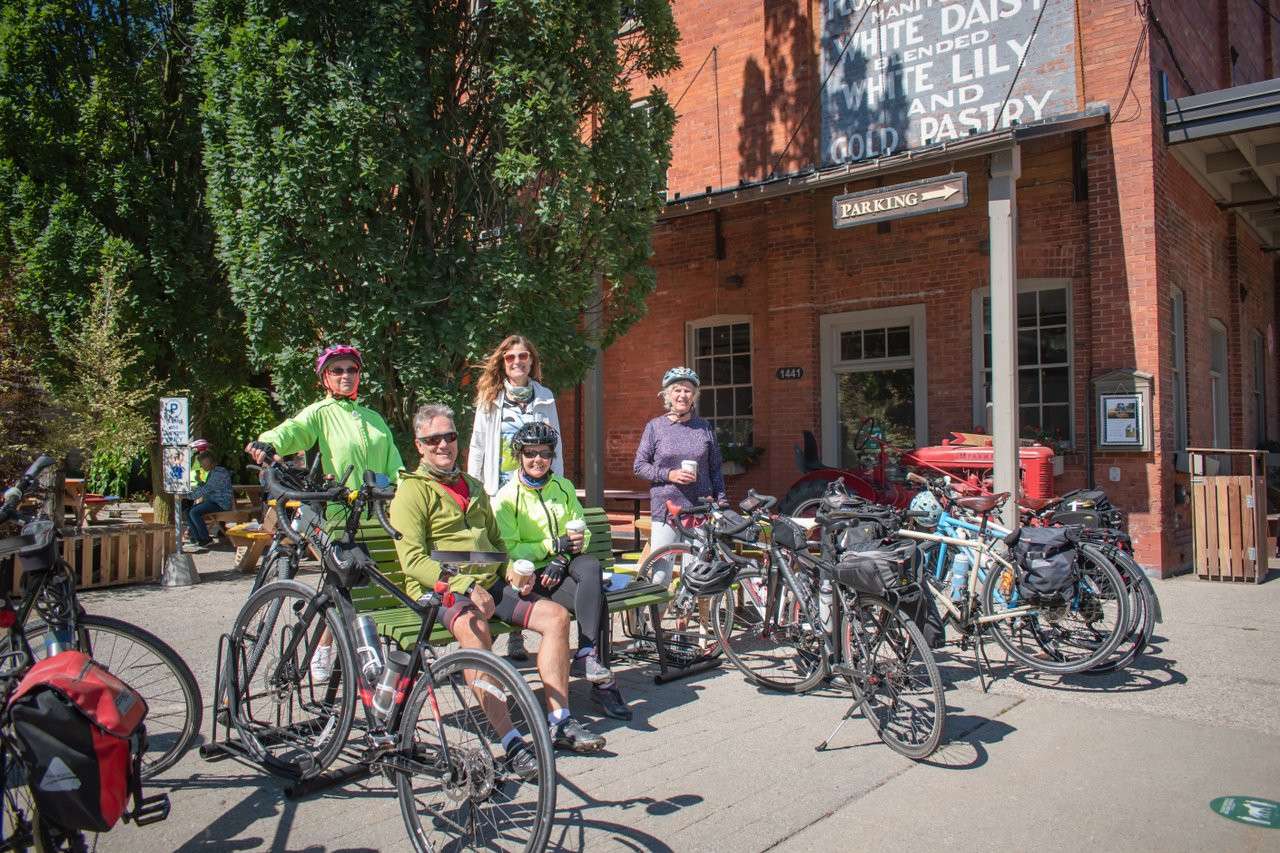 If you are a keen cyclist chances are you know the best routes in your neighbourhood, city and surrounding area. Hence who better to ask for ride suggestions than a local. Feeling like we left much to explore since our Ontario By Bike Ride in Waterloo Region a year ago, and dreaming of returning this fall, we reached out to a few connected friends to ask them to share some insider tips, their favourite rides and destinations in and around Kitchener, Waterloo and Cambridge areas.

One of my favourite places to ride in the region is along Walter Bean/Grand Valley Trail that runs east of Waterloo to Doon. The trail has a lot of fun ups and downs with options for exciting singletrack. Most of the trail is in great shape with lots of lovely river views. In the fall, it’s a bounty of colour. When I developed the GNR bikepacking route we incorporated this trail near the start from St. Jacobs.

As our bikepacking routes and grand start events start and end in St. Jacobs, a go to place for me to stop at is the Eco Cafe in St. Jacobs. They are a strong supporter of the burgeoning bike scene in the region and have a tasty menu. I often get their samosas.

Notes: The Walter Bean Trail runs through the cities of Waterloo, Kitchener, and Cambridge and closely follows the Grand River. The trail is mostly stonedust and gravel and has various access points along the Grand River. Visit Cambridge, Kitchener, and Waterloo’s websites to learn more about Walter Bean Trail access points in each city, or download the Region of Waterloo’s Bike Map to see all of the trails along the Grand River and throughout the Region.

(Kevin knows much about cycling across the region working as Principal Planner in the Transportation Department for the Region of Waterloo.)

Explore Waterloo Region Along Our Portion of the Trans Canada Trail

As you enter Waterloo Region from either the north or south, the Trans Canada Trail route follows the Guelph to Goderich/Kissing Bridge Trail and the Cambridge to Paris Trail respectively. Both trails are well-groomed stone dust along old railway beds with excellent tree cover. The fall presents a great opportunity for vibrant colours along these first sections. The Trans Canada Trail continues through the core areas of Cambridge, Kitchener, and Waterloo along a mix of well-groomed (and well-signed) stone dust, bike lanes, and paved shared-use paths.

Waterloo Region takes pride in protecting its agricultural heritage while embracing all the amenities of a large urban community. For example in about ten minutes, cyclists can leave the St. Jacobs Market District that is bustling with horse and buggies and ride next to the Region’s ultra-modern ION light rail transit system (and bikes are welcome on board at any time). Continuing into the urban centres of Cambridge, Kitchener, and Waterloo along the Trans Canada Trail, you will encounter a number Ontario by Bike’s bicycle friendly businesses right along the route. These range from bike shops to brewpubs to keep you moving and well fed on your adventure. 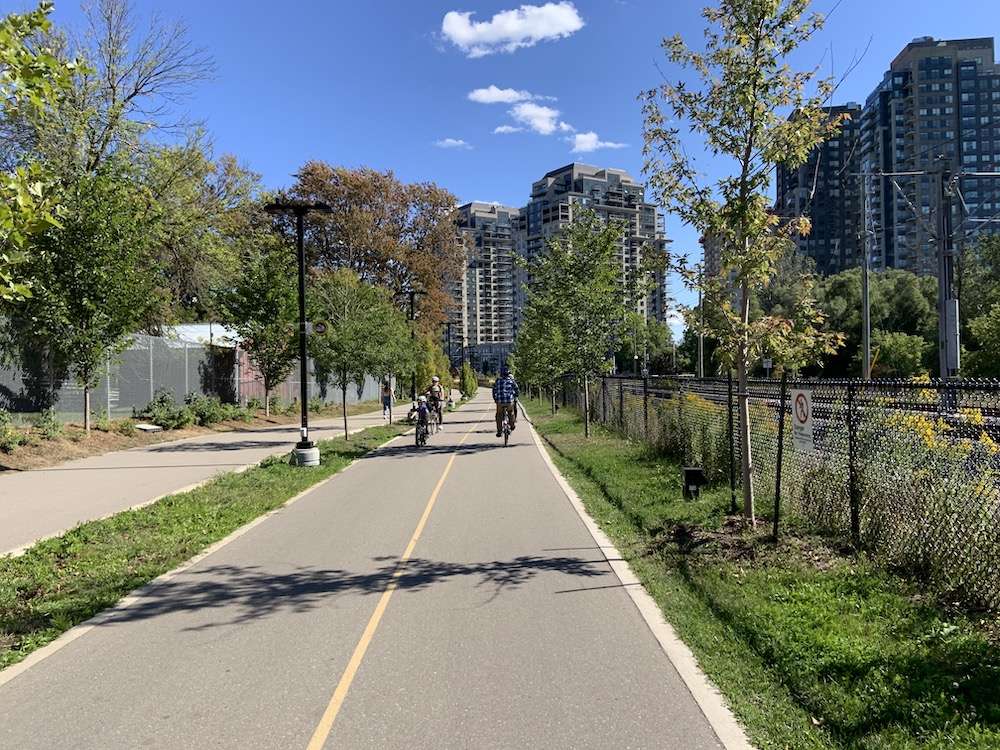 For those looking for a smaller trip, cycling between all three cities on the Trans Canada Trail is both a scenic route and manageable 30km distance. Those arriving by car can find 12-hour parking near the Trans Canada Trail in Cambridge (Ainslie Street Lot). Cyclists can follow the Trans Canada Trail north to Waterloo, board an ION train with their bike at the Research and Technology Station, and head back to Cambridge by taking ION light rail to Fairway Station and connecting to an ION bus to return to Ainslie Street. Transit information can be found at www.grt.ca and real-time departures and trip planning is available in apps like Google Maps.

(A passionate local cyclist Anne has worked hard to champion cycling and active transportation across the region through her work on a number of committees including the Grand Watershed Trails Network.)

A part of the longer Guelph to Goderich Trail (G2G), I often ride the Kissing Bridge Trail from West Montrose, and the famed and fabulous covered bridge, west to Linwood. Bookended by two great bakeries, Anna Mae’s Bakery and Restaurant in Millbank and Kitchen Cuttings in Elmira, the pies, butter tarts and selection of treats are hard to pass up on.

While the entire length of this segment of the Trans Canada Trail is 70km, I usually get waylaid making stops along the way and riding a much shorter part of the trail. Some top spots include: Block 3 Brewing, the Eco Cafe and the Waterloo Central Railway in St Jacobs; the bicycle friendly Waterloo Visitor and Heritage Information Centre in uptown Waterloo; Graffiti Market, Kitchener Museum, Stockyards Brewing and Cafe in Kitchener; Langdon Hall in Blair ; and the Cambridge Mill in Cambridge. 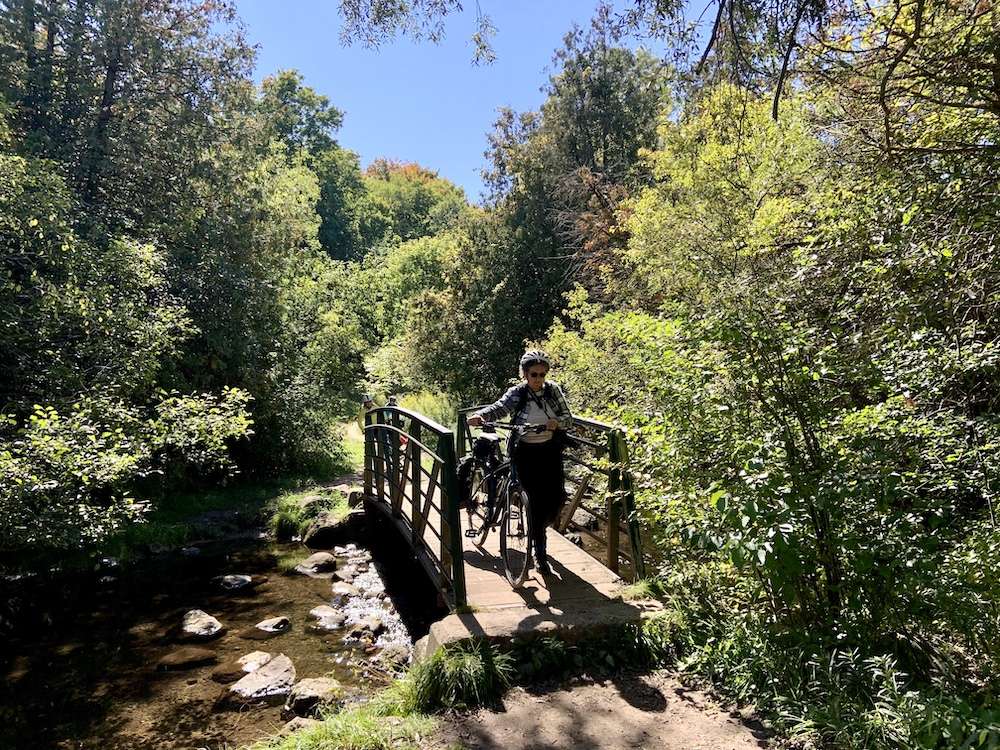 Running south out of Cambridge, the Cambridge to Paris Rail Trail is an easy to ride 18km each way following the meandering Grand River through beautiful Carolinian Forest.

An easy start from Riverside Park in Cambridge the easy to ride Mill Run Trail runs alongside the Speed River all the way to Hespeler, 6.5km each way. In Hespler the ride ends at Jacob’s Ladder a scenic river overlook which is near Four Fathers Brewing, Hespeler Village and the Hespeler Heritage Centre.

(One of the lead coordinators of the all-volunteer run fundraising Cambridge Tour de Grand, Adele centres many of her rides on routes used for this popular annual cycling event and likes to make the most of safe cycling infrastructure cycling in her city Cambridge, getting to and from the surrounding countryside.)

My “go to” ride starts behind our YMCA where there is a wonderful tree lined trail which takes you to a bike lane on Dunbar Road.  Turn right on another bike lane on Concession Road and take any left to King St. following King to the left and connect onto Fountain St. and the new bike lanes. This route takes you through the town of Blair alongside the Grand River and is part of the Tour de Grand’s 25km route.  There are many places to stop along this trail. You can choose the more rugged trail along the river or the upper paved trail. We travel home on a trail behind GCI High school. We choose to stop at a cafe in Queen’s Square in Galt (downtown Cambridge).  The ride takes approximately one hour at a good pace.  I love this route because it gives you a bit of everything, including a relaxing seat around the Queen’s Square Centennial Fountain. This is a popular stop for cyclists. 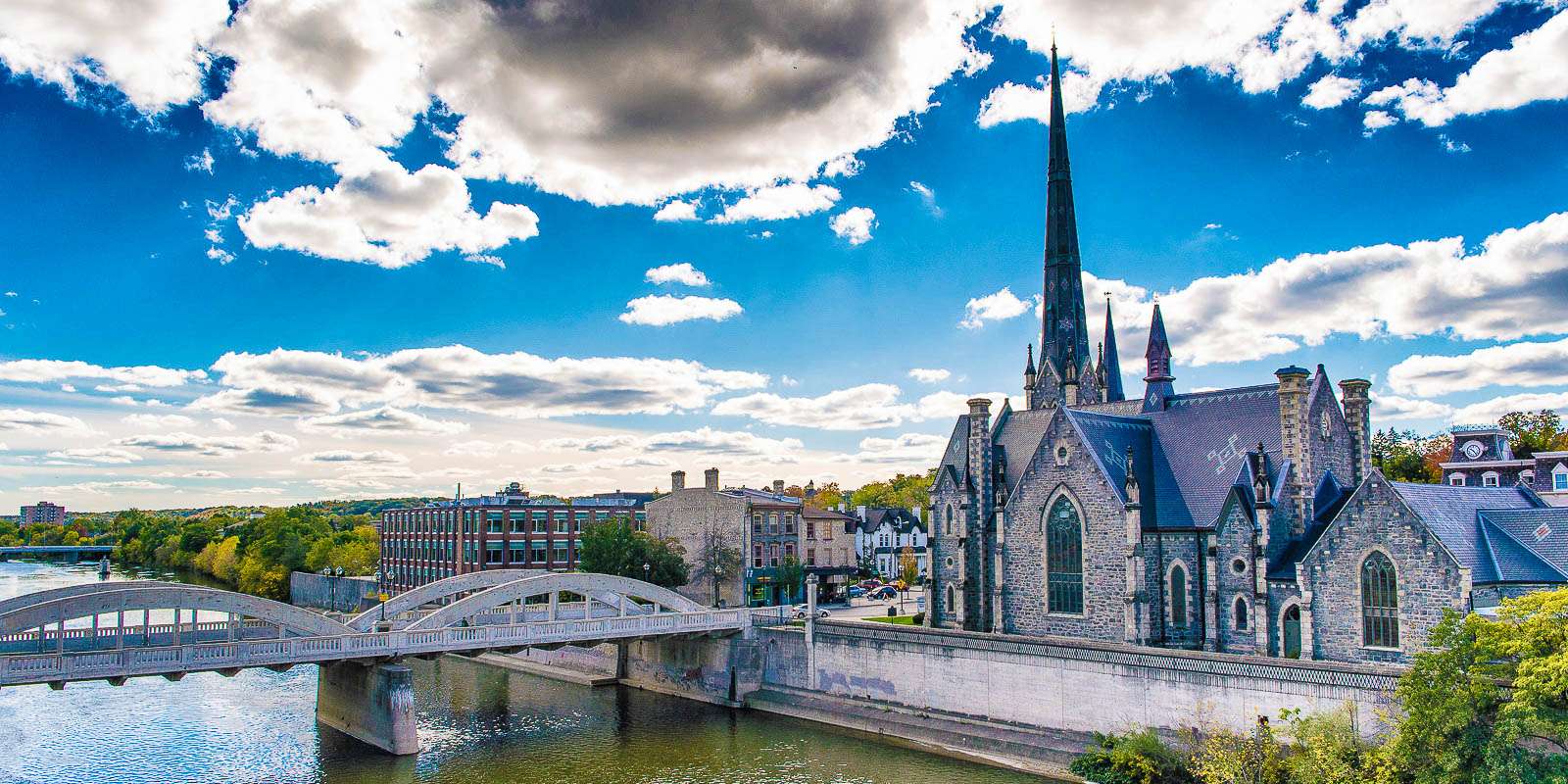 One of my favourite rides and a route that I ride frequently when out with the Waterloo Cycling Club is a longer route to the south west. Starting from uptown, near the University of Waterloo or Laurel Creek this 115km loop (see RidewithGPS route map) is a good one for faster and more experienced riders. The ride covers about 65km before dipping down into nearby Oxford and Perth Counties, with Stratford at roughly the halfway point. If caffeine is needed to get us to the end, pulling over for a stop at the Baden Coffee Company is an option.

When I ride in the city of Waterloo the Smile Tiger Coffee Shop is a favourite, and if I need any bike supplies or service McPhail’s Cycle is my local bike shop. 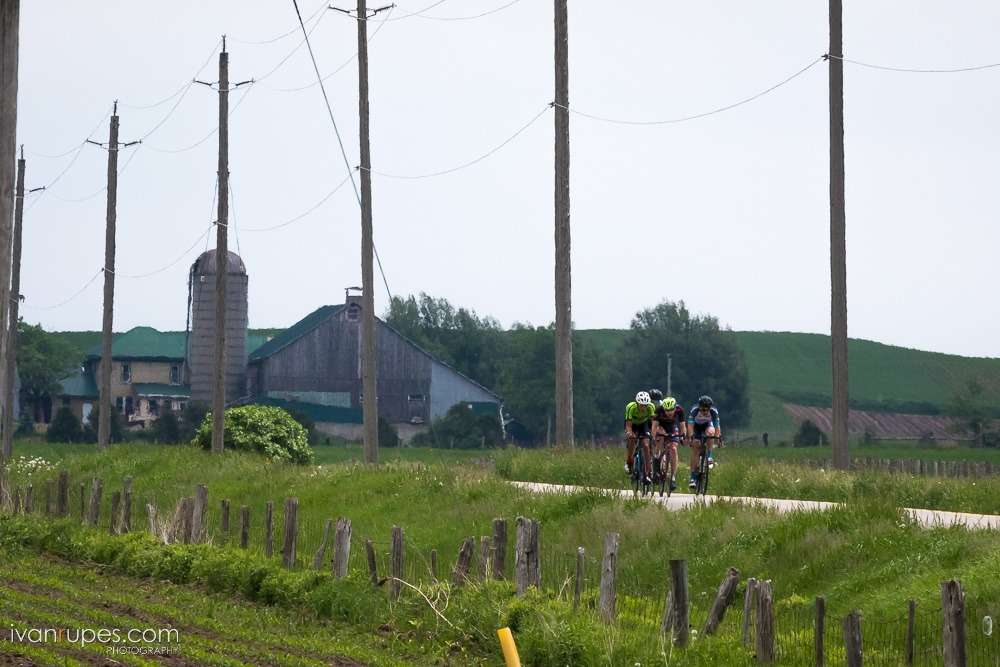 About the Author: Ontario By Bike