Norfolk County offer cyclists numerous appealing on-road cycling routes and off-road trails, whether along the north shore of Lake Erie, following the Grand River or through agricultural communities into quiet countryside. Cyclists can explore towns and cities en route and enjoy a full range of services catering to visitors year round.

The Great Lakes Waterfront Trail follows the scenic shores of Lake Erie passing through a number of lakeside communities, beaches, naturalized areas and local attractions across Norfolk County and links to the Lake Ontario Waterfront Trail in nearby Niagara.

An off road trail north from Port Dover, makes for a pleasant ride and is also an easy way to connect to Brantford and VIA Rail Bike Train options. Forest trails also offer mountain bikers a reason to journey to the region. Known for local foods, no cyclist will go hungry or thirsty pairing a cycling experience with culinary adventure in Norfolk County.

The Great Lakes Waterfront Trail – Stretching over 3600km, the Great Lakes Waterfront Trail is a route connecting over 151 communities and First Nations along the Canadian shores of the Great Lakes: Lake Ontario, the St. Lawrence River, Lake Erie, Detroit River and Lake St Clair, Lake Huron, Georgian Bay and the North Channel. The fully signed Trail uses the safest infrastructure possible, a mix of both on-road and off-road facilities, and is primarily paved, with sections of unpaved path and gravel roads. It can be enjoyed for as part of a day trip or on a multi-day long distance cycling adventure.

The Waterfront Trail runs over 70 km through Norfolk County from Crescent Bay in the east to Long Point and Houghton Centre in the west.

For information and to access downloadable maps visit www.WaterfrontTrail.org 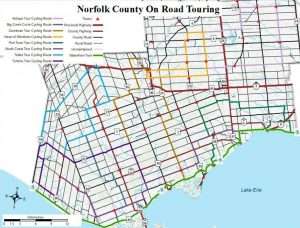 The following on-road bike routes are identified and published with detailed information, online and print maps plus downloadable PDF options. They are also featured in the annual Norfolk Tourism map. See map listed under Norfolk County – Published Maps, below.

* Please note there are many additional map guides for the region that cyclists may find interesting or useful. New maps and guides are produced yearly, and the information listed here may change.

* Please note there may be additional map guides for the region that cyclists may find interesting or useful. New maps and guides are produced yearly, and the information listed here may change.