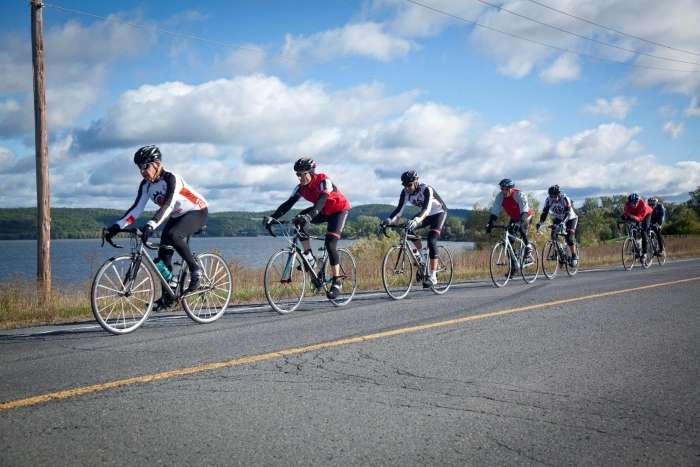 Perched upon the Quebec border and the shores of the Ottawa River, a designated Canadian Heritage River, cycling in Prescott-Russell offers a mix of waterfront and hinterland riding. Road cyclists can also ride cycling routes that reach both the Ontario and Quebec-side of the Ottawa River. Several ferry and bridge crossings can make for memorable cycling day trips or multi-day tours.

Quiet and well-paved roads take cyclists past beautiful agricultural lands and rural communities throughout the area. Looped routes can be connected offering longer or shorter cycling options depending on a riders’ skill sets. Mountain bikers will enjoy the 180 km of trails and gravel roads in Larose Forest, which is set in an area of woodlands and wetlands.

A number of looped road routes are featured on the two cycling maps for the area. A series of route links and connection points offer cyclists the opportunity to create longer cycling routes to extend day trips or create multi-day touring options. There are a total of 29 routes featured on RidewithGPS.

Additionally, the routes listed below are featured on the Prescott-Russell Regional Cycling Routes Map and Cycl-o-Route – Ottawa River Cycling Map.

Prescott Russell Pathway – A key connection to the city of Ottawa for recreational cyclists, the Prescott-Russell Pathway is a 20 km stone dust, multi-use trail extending eastward from the greenbelt near Blair Rd through the Village of Navan, part of the City of Ottawa.

La Route verte – Quebec’s provincial cycling network spans approximately 5,000 km on both on-road and off-road cycling facilities. Route Verte #1 begins northwest of Ottawa in Outaouais running on the Quebec side of the Ottawa River, through Gatineau and adjacent to the United Counties of Prescott Russell on the north shore of the Ottawa River between Rockland and St. Eugene.

Trans Canada Trail – While not coming directly through the United Counties of Prescott Russell, this cross-Canada trail runs through Ottawa and into the province of Quebec. The TCT is a four-season, multi-use trail system with various surface types and users. Located approximately 28 km from the border of Prescott-Russell through various trails and road routes.

Great Lakes Waterfront Trail – Stretching over 3,600km, the Great Lakes Waterfront Trail is a route connecting over 140 communities and First Nations along the Canadian shores of the Great Lakes: Lake Ontario, the St. Lawrence River, Lake Erie, Detroit River and Lake St Clair, Lake Huron, Georgian Bay and the North Channel. The fully signed Trail uses the safest infrastructure possible, a mix of both on-road and off-road facilities, and is primarily paved, with sections of unpaved path and gravel roads. It can be enjoyed for as part of a day trip or on a multi-day long distance cycling adventure.

The trail is located approximately 50 km south of Prescott-Russell, cyclists to/from Quebec can connect to the trail via La Route Verte #5 or through various routes that are featured on the Ride South Eastern Ontario cycling map.

Prescott-Russell Regional Cycling Routes. 2021. Map. This cross-regional, bilingual cycling map features the 200km cycling network and routes in the United Counties of Prescott-Russell, including off road recreation trail. Download or request the printed map or access the RideWithGPS accounts available on map for those looking for digital routing options. To request a hardcopy call 1-800-361-7439 or email info@tprt.ca

Cycl-o-Route – Ottawa River Cycling Map – 2016. Map. This map includes three looped routes along the Ottawa River, featuring cycling in both Ontario and Quebec. Other trail and cycling networks highlighted on map. Services, transportation (ferries) and other resources are available on map. Developed in partnership between Prescott-Russell Tourism, and the Quebec municipalities of Argenteuil Regional County and Papineau Regional County.

Prescott Russell Recreational Trail Website – A website providing tourism resources for the trail, including path and other route locations, pavilions and communities connected by the trail, construction and other trail conditions, as well as events associated with the trail.