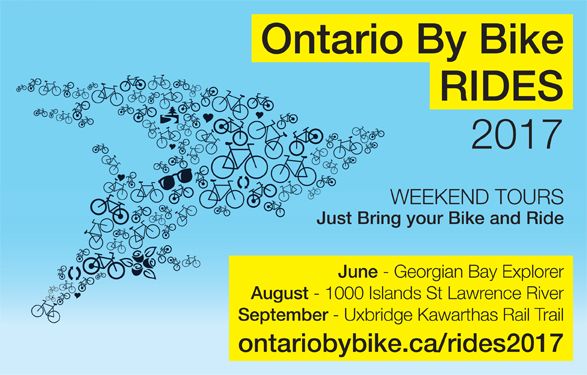 Our 2017 Ontario By Bike Ride and small group weekend tours are now finished. Consider joining us for an Ontario By Bike Ride in 2018. With a maximun of 35 cyclists, these fun recreational ride routes and value priced tours do sell out early. In 2017, Ontario By Bike hosted 3 weekend tours, in southern Georgian Bay, 1000 Islands and St. Lawrence River and in the Kawarthas. Link on each page to download the itineraries for a self-guided and self-supported tour.

Subscribe to our enewsletter and stay tuned to this page for 2018 tour destination announcements in early 2018.
Coming soon … early February.

The Ride: Join us for the first Ontario By Bike Ride in 2017, as we ride along the picturesque southern shores of Georgian Bay in Grey County. This two-day weekend tour features an even mix of riding along well-kept rail trails and quiet rural roads, both paved and unpaved. Starting from Stayner in the east and ending in Owen Sound, the route brings cyclists up and around the northern reaches of the Escarpment with frequent opportunities to cool off in Georgian Bay. Enjoy picturesque riding in southern Georgian Bay, connecting to quaint towns and villages along the way. Enjoy an evening in Meaford before continuing the ride west along country roads with vistas across the glistening waters of Georgian Bay. This small group tour includes accommodation, some meals, support van and as this ride follows a linear route, return transportation for you and your bike.
June Ride 2017 – SOLD OUT

The Ride: Join us to cycle one of the most spectacular routes in Ontario discovering the 1000 Islands and St Lawrence River on a three day, long weekend tour. Starting from Gananoque and ending in Cornwall, following the Waterfront Trail east, this ride is on a mix of trails and roads. Plan to slow down the pace to take in the scenery and make the most of waterfront rest stops and villages. Enjoy a night in Brockville before pedalling on to Morrisburg for the second night, and the last day of riding taking in an array of natural and heritage attractions in what was once called Upper Canada. This small group tour includes hotel accommodations, some meals, support van and as this ride follows a linear route, return transportation for you and your bike. We make it easy – Just bring your bike and ride.
August Ride 2017 – SOLD OUT

The Ride: Enjoy this weekend-long, quiet and safe off-road rail trail ride from Uxbridge through the Kawarthas ending at your choice destination of Peterborough or Lakefield. Whether you ride independently or with friends, join the 2017 Ontario By Bike Ride this September and make the most of this linear trail with the convenience of a coach shuttle back to start on this fully supported small group tour. The well-maintained, hard-packed trail, with some paved sections, traverses idyllic farmlands, along waterways and canals, and through lush green forests. This small group tour includes hotel accommodations, some meals, support van and as this ride follows a linear trail, return transportation for you and your bike.

Below you’ll also find the detailed ride itineraries from previous years, now available online so you can enjoy and replicate the ride routes with self-guided ride experience.

The Ride: Located just over an hour north of Toronto, Simcoe County has a rail trail network that loops and criss-crosses the region, making it a fabulous destination for recreational riders looking to explore the region by bike. Join us for a fabulous two day weekend tour along some of the best trails in Simcoe County. Passing through several small towns and by historic sites along the route, enjoy an easy ride on trails of mixed surfaces. Featuring rail trail riding along portions of the Trans Canada Trail, including the well-maintained Uhthoff and Tiny Trails, the route brings the group along the rugged shores of Severn Sound in Georgian Bay and through the beautiful countryside of Simcoe County. This itinerary suggests an overnight stay in Midland. View full details & download self guided itinerary HERE.

The Ride: A two day weekend tour and primarily off-road ride along the Greater Niagara Circle Route. Discover the quieter side of Niagara and Niagara south, with this spectacular trail ride along the Niagara River Recreational Trail, the Friendship Trail and the Welland Canal Parkway Trail. Fully paved and easy riding conditions, with all details outlined in the itinerary, will make for a wonderful weekend getaway and cycling experience. With limited road riding and unique ferry jaunt over the Canal, this looped ride is well suited for all types of cyclists. View full details & download self guided itinerary HERE

The Ride: Enjoy this weekend-long, quiet and safe off-road rail trail ride from Uxbridge through the Kawarthas ending at your choice destination of Peterborough or Lakefield. Whether you ride independently or with friends, this Ontario By Bike Ride itinerary features a linear trail, so arrangements will need to be made to either cycle back to the start or prepare vehicle pick-up in advance. The well-maintained hard packed trail, with some paved sections, traverses idyllic farmlands, along waterways and canals, and through lush green forests. Trailside hotels, bicycle friendly businesses, Doube’s Trestle Bridge, Peterborough Lift Lock and the Trent-Severn Waterway are all featured on this itinerary with a suggested overnight stop in Lindsay and lunch the following day in Peterborough. This popular route was part of the June 2015 and September 2017 rides. View full details & download self guided itinerary HERE

The Ride: Enjoy fabulous two-days or a weekend of riding on a spectacular off-road rail trail ride from Hamilton to Brantford, Paris to Port Dover, with ride ending on the shores of Lake Erie. Shorter or longer route options are available so you can make the most of the ride and time out on this interconnected well maintained trail system. Passing through many communities along the way, take time out to enjoy the sights, whether choosing to ride with friends or independently. This tour incorporates one overnight stop near Brantford, however this could be modified to include an overnight in Paris or elsewhere. Many bicycle friendly businesses are located throughout these regions, with many memorable ride highlights including the Hamilton-Brantford Rail Trail, the town of Paris on the Grand River, and the Black Bridge in Waterford.  View full details & download self guided itinerary HERE.