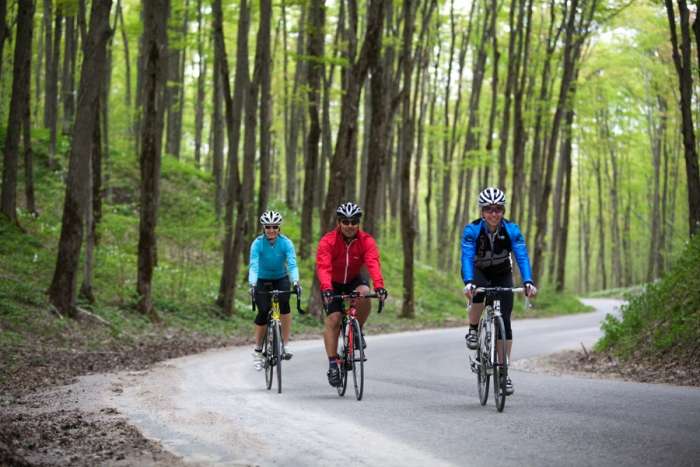 Whether you are an avid road cyclist, recreational rail trail fan or adventurous mountain biker, Simcoe County has a large variety of cycling routes and activities to fill first time visits and countless return trips. Centrally located an hour north of Toronto, once you are in Simcoe County many quiet roadways connect smaller communities and larger centers.

Simcoe County offers up a myriad of trails throughout the county from abandoned rail lines to waterfront meanders, through many provincial parks and conservation areas. Connecting from one trail or road to another is not hard to do, making longer cross-county tours from the beaches of Georgian Bay to the shores of Lake Simcoe an attractive possibility. Regardless of route there are plenty of opportunities to experience about the rich agricultural and cultural heritage of the area, while enjoying the charm and comforts available throughout the County. Mountain bikers will not be disappointed as there are number of well known and well-maintained private trail facilities that host regular events and competitions, plus activities and clinics for beginners.

Barrie By Bike – Routes – There are 3 cycling routes developed to explore Barrie & the surrounding area. All of these routes can be done at your own time and pace and all are self-guided.

Multiple on-road routes have been plotted and mapped using RidewithGPS.com, including elevation profiles. Difficulty ratings are from beginner to advanced. Cafes and lookouts are also marked en-route. Route information can be accessed via the Club website. Also mapped are the Centurion 100km routes, used in previous years for this popular cycling event.

The Simcoe County Loop Trail is a 160km loop that travels through nine municipalities, reaches three major bodies of water, including Georgian Bay, Lake Simcoe and Lake Couchiching. And, is primarily on off-road, multi-use rail trails! The route is flat, scenic and available as a multi-day tour. Riding counter clockwise:

Ontario By Bike Self Guided Itineraries – Ontario By Bike has hosted several small group tours on two-day cycling trips on trails in Simcoe County. One route itinerary starts and ends near Barrie, but can be started any where along the loop, and follows the Simcoe County Trail Loop through Midland, for overnight stop, and on to Orillia before ending in Barrie. Another, the Georgian Bay Explorer, starts in Stayner, continuing to Collingwood, overnight in Meaford and ends in Owen Sound. Ontario By Bike made available both digital and pdf mapping, as well as a self-guided itineraries to share with individuals and groups that may be interested in riding the same route.

Please note there may be additional map guides for the region that cyclists may find interesting or useful. New maps and guides are produced yearly, and the information listed here may change.

Travel by GO Transit – Bikes are allowed on the Barrie Line between Toronto and Barrie on Saturdays, Sundays, and holidays. GO offers train service all-day and 7 days a week between Toronto and Barrie, with space for up to four bikes per train coach. Stops along the Barrie line include Allandale Waterfront, Barrie South, Bradford, East Gwillimbury, Newmarket, Aurora, King City, Maple, Rutherford, York University and Union Station.